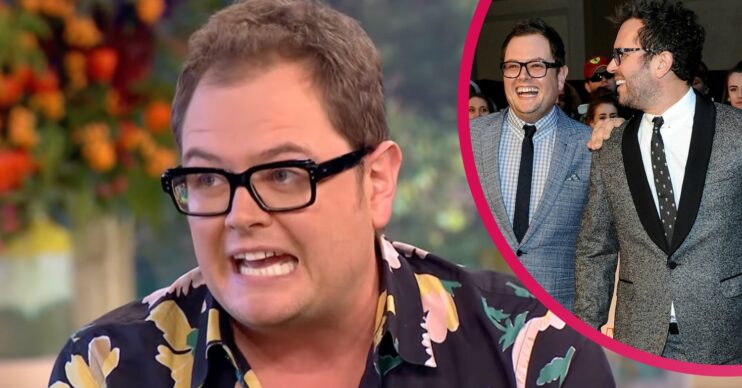 It comes weeks after announcing his marital split

The former couple, who were together for 13 years, announced their sad split last month.

But in a social media post this week, Alan was all smiles after spending the day with pal Martine.

The pair posed together as they stood outside Beaverbrook Hotel & Spa in Surrey.

Alongside the snap, Alan penned: “I bet Beaverbrooks was over the moon with us caterwauling at their gorgeous hotel all afternoon but anyway – thank you @martinemccutcheon for lunch.

“Just what the doctor ordered. Dinner on me next time.”

Just what the doctor ordered

Meanwhile, Martine also shared a heartfelt post to her profile.

The former EastEnders star posted a similar snap as she cuddled into the comedian.

She captioned the shot: “I love you Alan. Riddled with talent, kindness, compassion, wit… and the tonic to my gin! What a fab day!!

“Thank you for looking after us so well yesterday @beaverbrook. We had the best tea, lunch, view of the Surrey hills and we put the world right.”

The actress continued: “I said I was going to make more time for what mattered this week and so far so good. What such a special place & what a lovely friendship @chattyman.

“PS. I wont forget holding on to that golf buggy going around the bends & flying over those big bumps in a hurry.”

A second added: “Great to see you smiling.”

Meanwhile, it comes after ex-husband Paul was recently released from prison.

The 50-year-old managed to avoid spending longer than two nights in jail, following a drink-driving incident.

Just days after winning his appeal in court, Paul took to social media to break his silence.

On Instagram, he shared: “As you can imagine, this has been an exceptionally challenging time, but I am so grateful for the support and care I’ve received.

“I take full accountability for my actions, but I am so thankful for the opportunity to truly get better and to start my new chapter with strength and determination.”

Paul added: “I am now going back to my rehabilitation centre to keep my journey and progress moving forward and will be stepping away from social media during this time.”