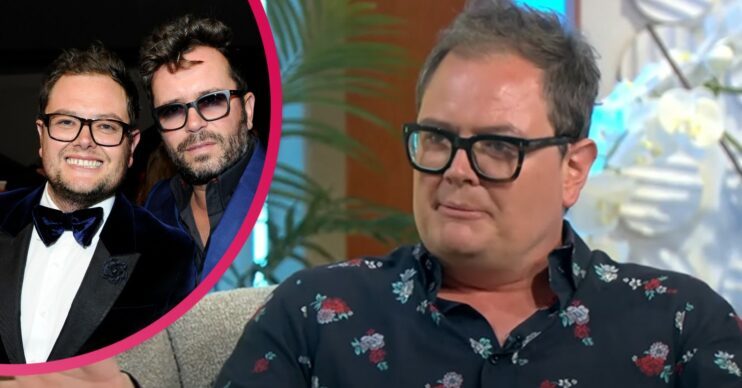 Sad news for the pair

Alan Carr and his ex Paul Drayton are ‘heartbroken’ following the death of their beloved dog.

Paul took to Instagram on Monday to share the sad news alongside a series of photos of their pooch, Bev.

He said he and comedian Alan had to make the “hardest decision” to “let our Bev go”.

Paul said in the post: “It is with a heavy broken heart that myself and Alan @chattyman had to make the hardest decision to make our last act of love and let our Bev go.

“She has been the best companion I could have hoped for.

“She has been my rock and saviour on many many occasions and I cannot begin to tell you how much we will miss her.”

He added: “We spent her last afternoon altogether in the garden of my new home, laughing, chatting and reminiscing on how much joy she brought to our lives, which is what I wanted her to feel and share.

“For all you pet owners out there, give them a kiss and hold them tight and tell them you love them. RIP my angel.”

Alan commented on the post with three broken heart emojis.

Fans also supported the pair on their sad news as one commented: “So much love to you both, hardest thing is letting them go.”

Another added: “Such sad news. Thinking of you all at this sad time. We will all miss Bev.”

A third said: “Awwww no @pauldrayton1 so sorry to read this. She left being loved.”

Another wrote: “It’s such a hard decision to make and I’m sure it is the right one. Sending you love as I have been where you are now.”

Alan and Paul are no longer together after announcing their split in January of this year.

At the time, the pair said they had “jointly and amicably made the difficult decision to divorce”.

A statement read: “After 13 years as a couple and three years of marriage, Alan Carr and Paul Drayton would like to announce they are separating.

“We request that their privacy is respected at this sensitive time.”