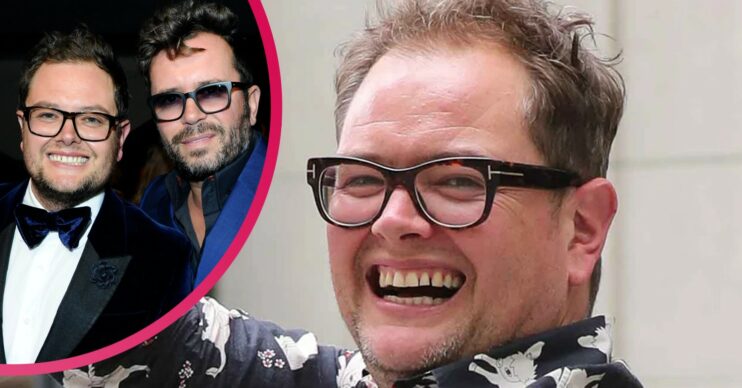 Alan is single following his split from ex-husband Paul Drayton

Alan Carr has cracked a joke about his love life as his divorce from Paul Drayton is finalised.

The much-loved comedian, 45, poked fun at his newly-single status during a podcast appearance with David Gandy.

David joined Alan on his Life’s A Beach podcast, where he asked the model to set him up with a friend.

On the podcast, Alan said: “While you’re here, I’m going to be single very soon…

“Have you got any male model friends who are down on their luck and chubby chasers?”

David replied: “I’m sure I could work something out.”

Meanwhile, it comes after Alan and Paul announced their split earlier this year.

In a statement, the pair said: “After 13 years as a couple and three years of marriage, Alan Carr and Paul Drayton would like to announce they are separating.

“They have jointly and amicably made the difficult decision to divorce and go their separate ways.

“We request that their privacy is respected at this sensitive time.”

Paul’s alcoholism is said to have been a contributing factor in their marriage breakdown.

Furthermore, Paul was released from prison in January after being sentenced for drink-driving.

The 50-year-old managed to avoid spending longer than two nights in jail.

Just days after winning his appeal in court, Paul took to social media to break his silence.

On Instagram, he shared: “As you can imagine, this has been an exceptionally challenging time, but I am so grateful for the support and care I’ve received.

“I take full accountability for my actions, but I am so thankful for the opportunity to truly get better and to start my new chapter with strength and determination.”

Paul added: “I am now going back to my rehabilitation centre to keep my journey and progress moving forward and will be stepping away from social media during this time.”

Read more: Alan Carr in depth – how did he and Adele become best friends and is he still married?

Despite their split, Alan has seemingly remained positive.

Last month, the comedian couldn’t help but crack a joke about his divorce whilst appearing on The One Show.