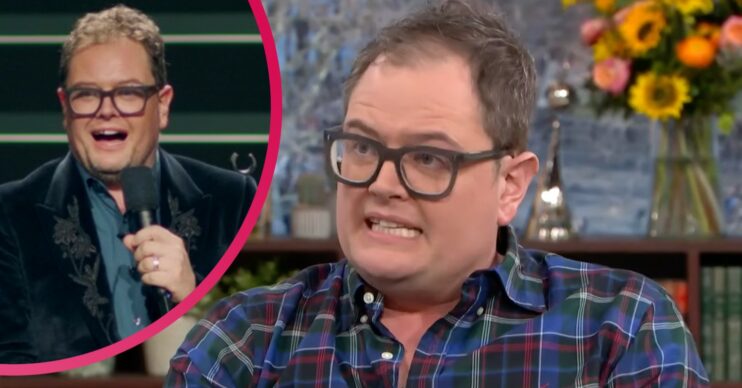 Alan Carr has set the record straight following an impromptu performance on ITV’s An Audience With Adele.

The comedian was invited on stage by his musician pal on the ITV special in December, where he briefly performed a rendition of Make You Feel My Love.

During an appearance on This Morning today (March 11), Alan revealed what really happened on the night.

The 45-year-old comic appeared on the show alongside hosts Alison Hammond and Dermot O’Leary.

As the topic of the Adele concert was brought up, he confessed: “I was swallowing sick!

“You could tell I was rubbish because it was the only time Emma Thompson stopped dancing.”

In addition, Alan went on to insist the performance wasn’t “set up”.

He continued: “And people still to this day think that was set up! You’d think I’d learn the words?

Read more: Alan Carr in depth – how did he and Adele become best friends and is he still married?

Adele drafted Alan on stage after being surprised by her old English teacher Miss McDonald.

The moment happened shortly before Adele was set to perform her hit track, Make You Feel My Love.

Instead, Alan began the song with the help of various celebrities at the London Palladium.

What else has Alan been up to?

The comedian is currently promoting the new series of Interior Design Masters.

Ahead of the episode tonight, Alan dropped in for a chat on The One Show earlier this week.

He started off speaking about his tour, revealing that it was all written before lockdown.

He then said: “But then what’s happened is my marriage has broken down, I’m going through a divorce.”

“No it’s alright,” Alan said, before joking: “Thanks for the flowers.”

He then laughed and said to camera: “Nothing, nothing,” as the crew could be heard laughing.

Alan announced his split from husband Paul Drayton in January of this year.