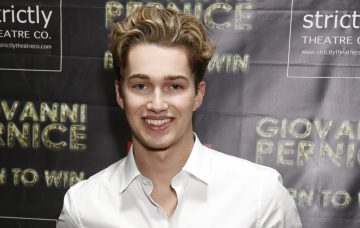 AJ Pritchard frightened to go out drinking after brutal attack

The dancer was attacked in December

Strictly Come Dancing star AJ Pritchard has revealed he’s been avoiding going out at night, after suffering a brutal attack in a Cheshire nightclub.

AJ and his dancer brother Curtis were attacked by eight men while out for a drink in Nantwich over the Christmas period.

The attack left both brothers injured, with Curtis requiring surgery on his knee – risking his job as a pro-dancer on Ireland’s Dancing With The Stars.

In interviews with ITV News, AJ revealed that, while he was already a cautious person, the attack has left him more so.

“I’m a very cautious person anyway, but yes, I didn’t really go out the night afterwards, that was for sure,” he said.

“New Year’s was sat at home on the couch with a cup of tea, very warm and very safe.”

He described himself as “hesitant” to go out, saying that he doesn’t tend to stay out long anymore.

“I was a bit hesitant, I’m not going to lie, but I have been out once or twice, just for a little drink or two,” he said. “I quite enjoy my cup of tea at home.”

The attack came in December, when AJ and Curtis were home with their family in Stoke-On-Trent for the festive holidays.

While out at a nightclub the pair were set upon by the group of men, apparently jealous of the attention the famous brothers were getting from women in the club.

The brothers gave an interview with The Sun shortly after the attack, with AJ claiming Curtis saved his life.

“Curtis risked his own dancing career to save mine as he threw himself in front of the attackers so they couldn’t get to me,” he said.

Curtis said that he acted on instinct, throwing himself in front of his brother.

“I looked up to see what was happening and I saw four lads go to grab AJ and I thought, ‘I’ve got to get in between them and him to protect him,'” he said.

Curtis was knocked out during the attack, and left with a broken nose.

AJ is currently appearing in the Get on the Floor live tour.

What do you think of AJ’s confession? Leave us a comment on our Facebook page @EntertainmentDailyFix and let us know what you think.