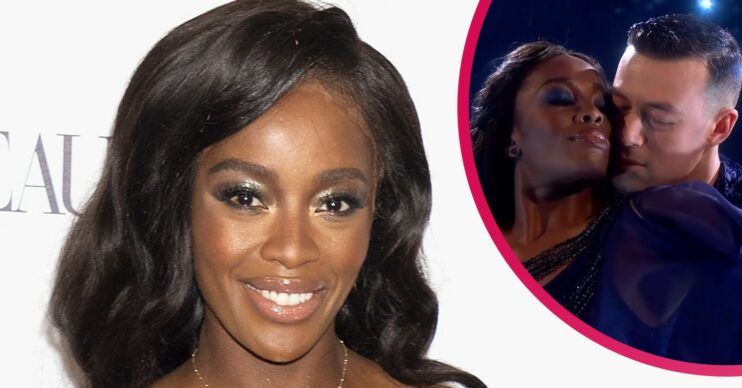 AJ Odudu has spoken out about her relationship with Kai Widdrington after he got together with Nadiya Bychkova.

The TV presenter and pro-dancer Kai were paired together on last year’s Strictly Come Dancing.

Their close partnership sparked the rumour mill that they were more than just good friends, however neither party ever confirmed there was romance between them.

Now Kai is in a new relationship with fellow pro Nadiya after the pair went public earlier this year.

In a new interview with Fabulous magazine, AJ has spoken out about how things are between her and Kai now.

“I just spoke to Kai yesterday and he was like: ‘Oh my god, you smashed it on Eurovision’,” she revealed.

“And that’s the beautiful thing — we’ll always have this really important and special bond where we got to go on this magical journey together.

“We really support each other and applaud each other.”

Kai and AJ reached the final of the dance competition in 2021.

However, sadly, they had to pull out days before the show after AJ suffered a devastating ankle injury.

She admits she was “really angry” at her ankle for the injury, but that the show was a hugely positive experience in her life.

“I was literally living the dream,” she said.

“Strictly was an overwhelmingly positive experience. It was the first time that I was introduced to a whole new audience of people who were accepting me for me — flaws and all. That felt really special.”

And as for future romance?

AJ revealed she is looking for love – “I’d love to meet someone” she said.

And earlier this month Ukranian-born Nadiya told Daily Mail’s Weekend magazine: “We’ve been seeing each other properly for a couple of months now.”

She went on: “It’s early days and we’ve been rehearsing for the Strictly Professionals tour, so there’s been very little free time.

“But we’re getting to know more and more about each other. He’s kind, compassionate and makes me laugh. I feel very relaxed with him.”