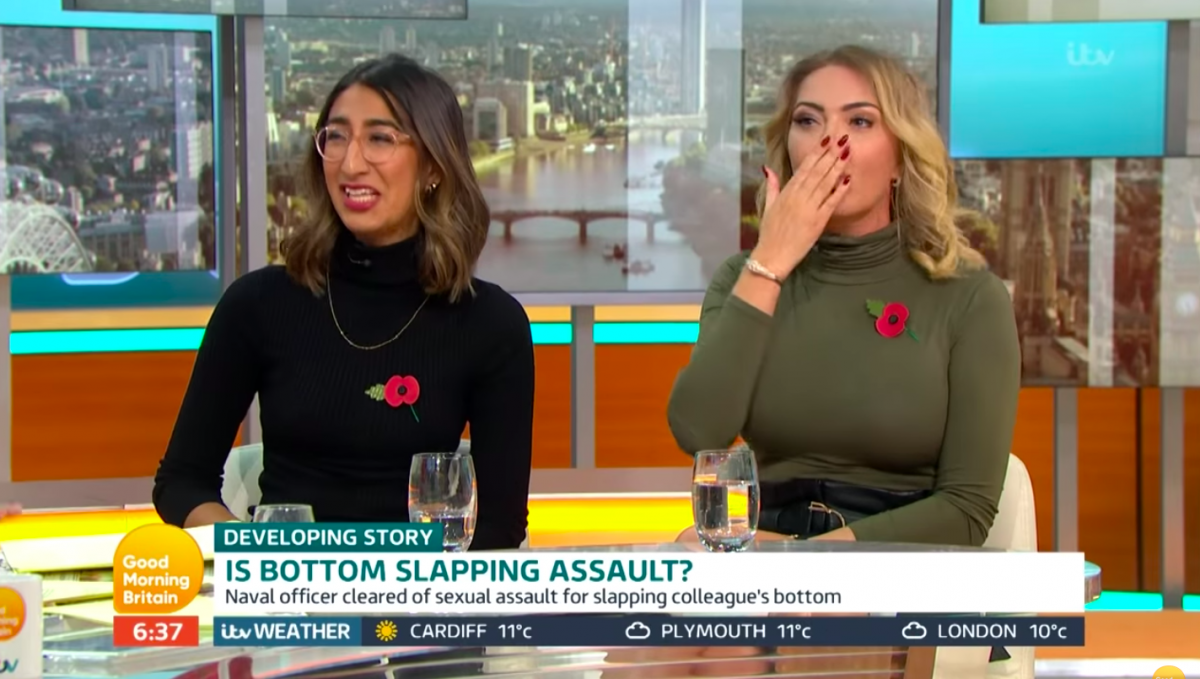 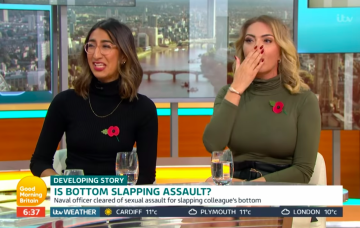 Both guests swore but only the reality star got in trouble

In a cheeky moment on Thursday’s Good Morning Britain, reality star Aisleyne Horgan-Wallace was forced to apologise when she accidentally swore live on air…

The former Big Brother star was in the studio as part of a debate about whether men should be allowed to slap a woman’s bottom – but she was scolded for using another word for a derriere that rhymes with “parse”.

You know the one… Just take away the ‘p’…

Aisleyne, 39, was being interviewed by presenters, Susanna Reid and Richard Madeley – who is covering usual host Piers Morgan – when she insisted Navy Commander Steven Heap should not have got in trouble for slapping a female officer’s bottom.

After Aisleyne told the presenters that her solution would be to “slap him in the face” if she didn’t like it, journalist Radhika Sangani was the first to say the word, commenting: “If you’re a junior and your boss suddenly grabbed your [bleep], that’s definitely assault…”

Susanna quickly told her off, jumping in to say: “Er, OK, shall we not use the A word at 6.37 in the morning?”

“Sorry. Oh, my bottom, slap my bottom,” she laughed correcting herself. “I’m so sorry.”

Fans watching at home joked about the error, with one tweeting: “That woman can’t say [bleep] at 6:30 on @GMB without them having a meltdown”.

Another added: “Oh FFS they’re having to apologise for saying [bleep] on #gmb 🙄”.

Aisleyne later took to Instagram to joke about her error.

Alongside a picture of herself from behind, she wrote: “What an ‘[bleep]’ 😂🤦🏼‍♀️🤷🏼‍♀️ so sorry if anyone was offended by my slip of the tongue @gmb ❤️🌹

One of her 178k followers wrote: “Hahaha I seen it, I was in stitches! But you’re so right though, it’s banter. There is a limit and every case is individual.”

Another commented: “Oh their face at you this morning she was not impressed 😂😂😂😂😂”.

A third added: “😂😂😂 You were great @aisleyne1, even made my kids giggle with the little slip of the tongue!!!!xx”.

Aisleyne shot to fame in 2006, with her divisive appearance on Big Brother.

She’s best known for giving the world the phrase: “You better know yourself, little girl.”

We’re wondering what would’ve been more suitable for 6.40am… Bottom? Bum? Derriere? There are so many options.

What did you make of Aisleyne’s slip-up? Leave us a comment on our Facebook page @EntertainmentDailyFix and let us know what you think.