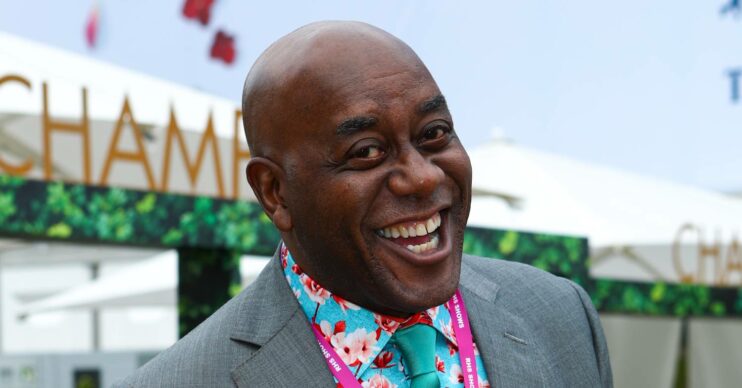 Cooking star identified her on Twitter as his sister

Ainsley Harriott ‘saved a woman from drowning’ at the Chelsea Flower Show earlier today (Monday May 23).

He came to the rescue after the woman – later identified as his sister on Twitter – fell into a water feature.

According to reports, chef Ainsley prevented his sibling Jacqueline from drowning after she tripped and tumbled in.

Paramedics later took Jacqueline to hospital. And this afternoon, Ready Steady Cook legend and This Morning regular Ainsley has given fans an update on her health.

The 65-year-old telly fave was reportedly seen checking on Jacqueline as she lay on the ground nearby to where she fell in.

It is believed she is a retired teacher – and was her brother’s guest at the VIP launch of the event in London.

Read more: Good Mood Food host Ainsley Harriott once had a ‘hit’ placed on him

She reportedly ingested a large amount of water and had to be pulled out of the feature.

Other attendees gathered around as Jacqueline was tended to, with DIY SOS presenter Nick Knowles pictured among the throng.

How is Ainsley Harriott’s sister now?

According to The Sun, paramedics arrived shortly after Jacqueline’s fall and took her to hospital.

A guest told the tabloid: “The garden was packed with lots of people and I think the woman must have fallen into the pond or tripped over and ended up in the water.

She was coughing up lots of water.

“I think she nearly drowned. She was pulled out by Ainsley Harriott and some other celebrities before they laid her down on the floor. She was coughing up lots of water.”

Ainsley has subsequently reassured followers she is “doing fine”.

Just a big thank you to everyone who helped my sister when she had a fall at the Chelsea Flower Show this morning. She’s doing fine and all is well 😊 xx

He tweeted: “Just a big thank you to everyone who helped my sister when she had a fall at the Chelsea Flower Show this morning.

“She’s doing fine and all is well.”

ED! has contacted a representative for the Royal Horticultural Society for comment.