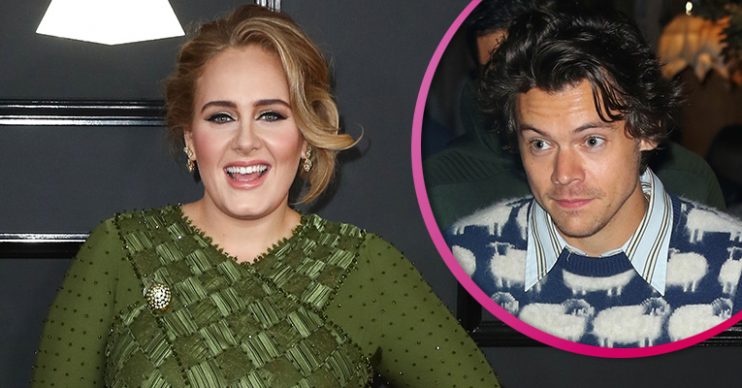 He's been her rock since her split apparently

Last week, singer Adele revealed to fans on her sunshine holiday to Anguilla that she had shed a whopping seven stone in weight.

However, now it has emerged that the star had a superstar cheerleader in her old pal Harry Styles – who just happened to be holidaying in the Caribbean with her over the New Year.

Now, new details of the pair’s relationship have been revealed, with sources revealing that Harry has been Adele’s “rock” following her split from husband Simon Konecki.

Adele has shrunk from a size 18 to a size 12 in just nine months, and she did it with a little help from healthy eating fan Harry.

Read more: Cheryl to look for sperm donor “sooner rather than later” as she puts deadline on family plans

A source told Closer: “Harry was Adele’s rock when she split from Simon last April. He checked in on her constantly, stayed over at her LA mansion whenever she needed company, and generally was an amazing friend to her when she most needed it.”

While they’ve always been flirtatious, she says it’s only in the last month that she’s started to see him in a romantic light.

They added: “Harry’s always been very health conscious. After Adele vowed to get in shape, he said he wanted to help her, so took her hiking on some of his favourite trails in Malibu, occasionally did HIIT classes with her, and gave her a hand with meal-planning and cooking to help her stay on track.”

The source revealed that Adele swapped sugary tea for Bulletproof coffee – black coffee mixed with butter and coconut oil that Harry is said to drink to curb his appetite.

He is also said to have encouraged her to cut out meat when possible and enjoy weeks at a time off the booze.

Read more: The “real” reason behind Harry and Meghan’s decision to step down as senior royals

However, while he was supporting the Someone Like You star through her body makeover, it’s claimed that Adele has started to see Harry in a different light.

The source said: “While they’ve always been flirtatious, she says it’s only in the last month that she’s started to see him in a romantic light. It’s still early days, but she hasn’t ruled out exploring their chemistry and connection. She’s finally back to her best and feels ready to explore a relationship with a new man, whether that’s with Harry or someone else.”

Adele is said to be “the happiest she’s been in a long time” – which is surely a double-edged sword for the star who famously writes albums full of heartbreak anthems.

Personal trainer to the stars Camila Goodis – who trains Robbie Williams’ wife Ayda Field, who is a friend of Adele’s – has also revealed details of the star’s body makeover.

She said: “Adele and Ayda are good friends, so I helped Adele when she was at Robbie’s house. I don’t believe she liked exercise much, but she has changed her lifestyle and I think 90 per cent of that was dieting.”