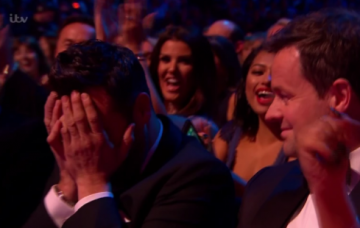 He didn't ignore what was on everyone's mind

Ant and Dec were the big winners at the National Television Awards as they collected their 17th presenting prize in a row.

The duo – who were making their first public appearance since Ant McPartlin announced he was splitting from his wife – also won the inaugural Bruce Forsyth Entertainment Award in memory of the late all-rounder who died in 2017.

Ant said winning this “really means a lot” following a “tough 12 months” and thanked “best mate” Dec Donnelly for helping him through it.

He said: “It’s been a tough year for me personally, quite an emotional night so to kind of top it off with three awards has been … can I have a lie down now? I’m feeling very good thank you.

The pair’s work on I’m A Celebrity … Get Me Out Of Here! was the first win of the night with the pair almost missing their victory speech after being caught in traffic.

As the ceremony began airing on ITV, the Britain’s Got Talent hosts revealed on Twitter they were still en route and watching the opening on an iPad.

Photos from the red carpet saw them dashing into the ceremony where their Saturday Night Takeaway show was handed the first ever Bruce Forsyth Entertainment prize ahead of The Graham Norton Show, All Round to Mrs Brown’s and Celebrity Juice.

Ant said it felt “very, very apt” to pick up the award on Tuesday evening as the duo had just begun filming a tribute to Sir Bruce.

Dec said they were “thrilled and proud and honoured” to collect the award on the same stage where they had performed alongside Sir Bruce at the opening of a previous NTAs.

Sir Bruce was also remembered by his former Strictly Come Dancing co-host Tess Daly as the dancing competition was handed the prize for best talent show.

Collecting the prize, Tess said: “I’d like to dedicate this award to my friend and yours the one and only Sir Bruce Forsyth. And I would like to say thank you for the memories.”

Other winners on the night included Paul O’Grady who received a special recognition award for his ITV show, For The Love Of Dogs, and the Sir David Attenborough-narrated Blue Planet II which received the impact award.

Acknowledging his cameramen and women he said: “These are the people who should be holding this but I know they would be joining me in what we were all trying to do was raise an issue which is of great importance not only to this country but worldwide.

“It’s what we are doing to our planet. If our television programmes have helped stir the consciousness of people around the world and that we are to do something to protect our beautiful world then all of us would be very pleased.”

Broadchurch beat off competition from Line Of Duty, Sherlock and Little Boy Blue in the crime drama category with star – and the new star of Doctor Who – Jodie Whittaker dedicating the win to survivors of sexual assault.

Coronation Street’s Lucy Fallon claimed the serial drama performance while Peter Kay’s Car Share won the comedy show award with the comedian “gutted” to not be at the ceremony according to his co-star Sian Gibson.

Kay announced in December that he had to cancel his first live tour in eight years due to “unforeseen family circumstances”.

Gibson said: “Obviously I have got to say thank you so much to Mr Peter Kay.

“He is gutted he can’t be here tonight but he sends his love and he is going to be over the moon so we’re going to go and phone him.”

The NTAs are voted for by the public and have been running since 1995.