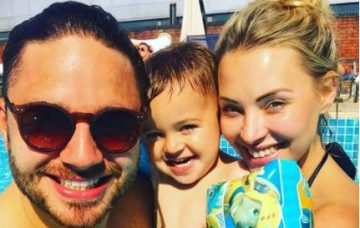 Their daughter is due soon!

The 28-year-old has admitted she’s going to miss her baby bump, as she doesn’t think she’ll have a third child.

Writing in her blog for OK!, she said: “I’ll miss it because I don’t think we will do it again.

“We’re still only fairly young – Adam is 30 this year and I’ve just turned 28 – so it’s a nice age and we’ll kind of have our lives back and be able to enjoy our children as they’re growing up with us being fairly young parents.”

Caroline and Adam already have a son, Teddy, three, and they revealed earlier this year that they are currently expecting a girl.

The dance school owner said this has made her feel even less like having a third baby.

“Because we’ve got one of each, there’s no pressure as well. We were so happy when we found out it was a girl,” she said.

Caroline also revealed that she intends to try and breastfeed her daughter, after she ended up bottle-feeding Teddy.

She explained: “I breastfed Ted for a couple of days when he was born but he got jaundice, (when they go quite yellowy) because he wasn’t feeding enough and it panicked me. Obviously, from a bottle you can tell how much they’ve drank.”

She added: “I will give it a go this time around, and of course I want the best for the baby, so if it works then it works, but I’m not putting myself through that worry.”

Caroline has been with former Emmerdale actor, Adam, for ten years.

They tied the knot in 2017 following Adam’s appearance on I’m A Celebrity 2016, where he won over a new legion of new fans with his bubbly personality, and finished in third place.

Adam left his role on Emmerdale as Adam Barton earlier this year as part of the gripping “who killed Emma Barton” plot.

On his exit, he said he wanted to spend more time with his family, and “try something new” away from parts in soaps.

Is two the ideal number of children to have? Leave us a comment on our Facebook page @EntertainmentDailyFix and let us know what you think!