He's had enough of the drama

Ryan Thomas’ brother Thomas has said he wants the Roxanne Pallett drama “put to bed” as the “damage is already done”.

Last week, former Emmerdale star Roxanne, 35, claimed Ryan, 34,  punched her during what appeared to be a play fight in the Celebrity Big Brother house.

The incident resulted in Ryan, who apologised and said there was no malice intended in his actions, being given a formal warning, which caused outrage among his loved ones and viewers.

This week, Roxanne – who left the house just a day after the incident – publicly apologised to Ryan, saying she “got it wrong” and “mistook what was playful”.

Ryan’s twin brothers Scott and Adam have been very vocal since the incident played out on screens, and have criticised Roxanne on social media on multiple occasions.

Now it seems Adam wants to draw a line under what has happened and put the drama to bed.

The former Emmerdale actor replied to a tweet by radio presenter Jamie East, which was promoting an episode of his Reality Check podcast.

Jamie wrote: “One of the topics on tomorrow’s #realitycheck is: When is enough enough with things like Roxanne gate? She’s out, lost her jobs for the foreseeable and is clearly in a dark place.

“Should the pitchforks be put away now?”

Adam replied to the tweet: “Put it to bed now the damage is done.” 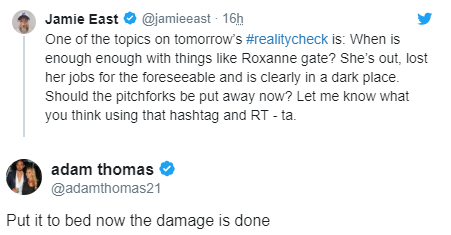 Roxanne told Emma she’s “owning” and “accepting” her new title as “the most hated girl in Britain”.

She said: “For Ryan, his family, friends, colleagues and everyone I’ve affected by such an enormous reaction that could have been devastating for him, all I can say is I’m devastated and I’m sorry.

“Watching it feels like a completely different scenario to how it felt at the time.”

Emma quizzed her on just how she “could get something so wrong” in her head, to which Roxanne said it was “how I felt when he did it”.

Following the interview, Adam tweeted: “I just heard white noise coming from her all I needed was the look on @EmmaWillis face throughout… it said it all am done with all this now it’s draining.”

Meanwhile, Ryan’s mum Gail appeared on Tuesday’s This Morning and said she’ll never forgive Roxanne for what she did to Ryan.

She said: “I just want Ryan to feel good in his own state of mind. That will help me forgive Roxy more.”

Gail also said it was a “relief” to hear Roxanne apologise to her son in public, but she feels Ryan still deserves a personal apology and to have his formal warning revoked.

What did you think of Roxanne’s apology to Ryan? Leave us a comment on our Facebook page @EntertainmentDailyFix and let us know what you think!