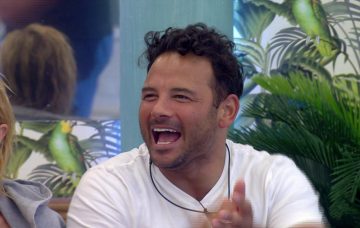 Ryan Thomas’ nephew and niece have sent the cutest messages of support ahead of Monday night’s Celebrity Big Brother finale.

The children of Ryan’s younger brother Adam, 30, have been sporting sweet personalised T-shirts urging everyone to vote for their Uncle Ryan to win!

Adam and his wife Caroline are parents to son Teddy, four, and daughter Elsie, born in May.

He also sang a jingle to the theme of the viral Baby Shark song, changing the lyrics to “Vote for Uncle Ryan. Doo, doo, doo. Uncle Ryan, doo, doo, doo.”

Caroline uploaded the video with the caption: “Ted says… Baby shark is no more!”

Meanwhile, Ryan’s girlfriend Lucy Mecklenburgh has been giving fans a look at the welcome home she’s arranged for Ryan when CBB concludes.

She shared snaps to Instagram Stories showing her home filled with balloons, flowers and bottles of bubbly to welcome back her man!

She’s made no secret of how much she’s missed the former Coronation Street star, who has been locked up in the CBB house since August 16.

It’s been particularly tough for Lucy and the Thomas family given the difficulties Ryan’s endured in the house.

Earlier this series, former Emmerdale star Roxanne Pallett accused Ryan of punching her during what appeared to be a play fight, leading Big Brother to issue him with a formal warning.

Ryan was seen in tears looking distressed as he apologised and said there was no malice intended.

After quitting the show, Roxanne admitted she’d “got it wrong” and issued two public apologies to Ryan and his loved ones – on Channel 5’s Jeremy Vine and in an interview with Emma Willis on CBB – for making the accusation.

Meanwhile, Ryan also fell sick last week, leading him to be removed from the main house for a day while he recovered.

He will face off against Dan Osborne, Gabby Allen, Nick Leeson, Psychic Sally and Kirstie Alley in the finale.

Who do you want to win CBB? Leave us a comment on our Facebook page @EntertainmentDailyFix and let us know what you think!