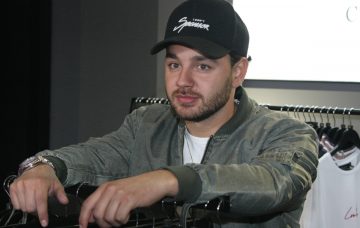 OFormer Emmerdale star Adam Thomas has shared the first pic from the set of his brand new TV show, Pitching In.

The actor, who played Adam Barton in the ITV soap, posted a snap to Instagram showing the cast of the BBC family drama gathered together on their final day of filming.

Adam, 30, added: “Feeling more motivated now than ever to keep pursuing my dream and to keep learning… this is just the beginning let’s do this.”

Fans were excited to see the snap, with many telling Adam they’ll be tuning in next year!

One wrote, “Ahhh!!! You really are amazing, Adam! I’m so proud of you. I’m so excited to see you back on TV, you’re gonna be amazing! Much love.”

It’s his first major TV role since bowing out of Emmerdale earlier this year.

Pitching In stars Gavin and Stacey favourites Larry Lamb (Michael Shipman) and Melanie Walters (Gwen West) and is scheduled to air on BBC One Daytime and BBC One Wales in spring 2019.

The storyline revolves around three generations of the same family who are “all struggling to make the best of a very unusual – and sometimes very difficult – situation.”

It’s set in a caravan park on the north Wales coast.

Larry said recently: “Eleven years after Gavin and Stacey burst onto the scene I’m heading out west again, switching Barry Island for Anglesey this time! I’m delighted to be playing the role of Frank in Pitching In – it’s a touching, funny and romantic story and a fascinating glimpse of life on the north Wales coast.”

Adam’s involvement in Pitching In was revealed in September, but the exact details of his storyline and role has been kept under wraps.

As well as starring in Emmerdale, Adam appeared in Waterloo Road as Donte Charles.

Adam’s had a busy time lately: alongside filming Pitching In, he’s been working as a property executive for a luxury property firm in Manchester run by his close friend Adam Kamani.

He’s also due to take to the stage this festive season as Hollywood Producer in the touring version of Nativity! The Musical.

Adam will perform at Liverpool’s Empire Theatre from 31 October to 4 November, and at the Regent Theatre in Stoke on Trent from 5-8 December.

Are you looking forward to Adam’s new TV show? Leave us a comment on our Facebook page @EntertainmentDailyFix and let us know what you think!