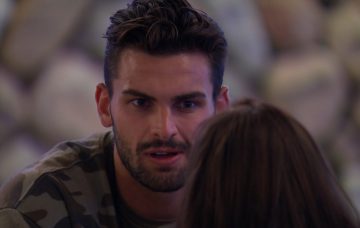 A mystery tweet was doing the rounds on Tuesday night

After Tuesday night’s episode aired, a tweet began doing the rounds which purported to come from Adam’s friends and family.

It expressed disappointment in Adam’s behaviour towards current partner Rosie Williams, who was in tears on Tuesday over Adam’s interest in newcomer Zara McDermott.

The tweet read: “Even us at home really don’t agree with what Adam’s been doing in the house. Actually feel sorry for Rosie. No remorse. Families not happy with his actions (sic).”

Further tweets were sent purporting to be from Adam’s family, too.

However, a statement was then posted to Adam’s verified Instagram account which denied the remarks were made by his family.

The statement said: “We have NOT issued this and would NOT condone these comments at all! Say what you will this as a reality game show!”

Adam’s relationship with Rosie was the main subject of Tuesday night’s Love Island, as a hurt Rosie admitted feeling gutted and embarrassed that he’d moved on to newcomer Zara.

Rosie had been intimate with Adam in bed just days earlier and sobbed she never would have done that if she’d thought he wasn’t serious about her.

She poured her heart out to Adam about feeling upset, telling him: “I don’t think you have any idea how much you have hurt me and really upset me. And the worst thing is, I don’t think you actually care. You are literally like stone.

“I shared a night with you I wouldn’t share with somebody unless they meant something to you, I trusted you. You had what you wanted and ditched me 12 hours later.”

Adam, however, accused Rosie of having a “bee in her bonnet”.

Viewers  – including former islander Hayley Hughes – were riled as Adam appeared to smirk and roll his eyes as an upset Rosie said she he’d “broken her heart” and began to cry.

The way Adam is sat there smug when Rosie is pouring her heart out, is breaking my heart she's a million times better than him #loveisland

Adam is the worst type of guy 🤢 #loveisland

Adam’s reaction to Rosie then was honestly one of the most heartless things I’ve ever seen. #loveisland

Others, however, felt Rosie should perhaps have known what she was getting into, as she made out with Adam just minutes after he ditched his first partner, Kendall Rae-Knight.

Some other viewers didn’t think Adam had done anything wrong.

Am I the only one that doesn’t feel like Adam has done anything wrong? It’s love Island… that’s the point. If he don’t like ya Rosie why you crying about it move on

Rosie… you’re one to talk when you were snogging Adam 3 minutes after he dumped Kendall! Now the tables have turned and you don’t like it!!!!! #LoveIsland

What did you think about Adam’s behaviour? Leave us a comment on our Facebook page @EntertainmentDailyFix and let us know.