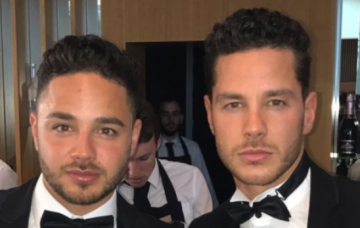 They partied the night away on Saturday

Adam and Scott Thomas celebrated their 30th birthday this weekend and it was definitely a star-studded event.

The twins partied the night away at Impossible bar in Peter Street, Manchester, alongside a string of their closest friends, family and their co-stars.

Adam and Scott arrived at the venue beaming for the cameras with their arms wrapped around each other.

Former Emmerdale actor Adam was also joined by his wife Caroline, whom he has two children with.

Adam looked dapper in a light grey checkered blazer and trousers while Caroline looked stunning in a black mesh dress.

The couple, who tied the knot last year, welcomed their second child together, daughter Elsie-Rose, in May.

The couple were joined by Adam and Scott’s older brother Ryan and his girlfriend former TOWIE star Lucy Mecklenburgh.

Jack, who plays David Platt in the soap, arrived at the venue with his girlfriend Hanni Treweek.

Meanwhile, Kym – who plays Michelle Connor in Corrie – arrived at the party with her new boyfriend Scott Ratcliff.

Danny, who plays Aaron Dingle in the Dales, sported a casual look in a black t-shirt and black jeans as he was pictured with birthday boy Scott.

Ahead of the big night, Scott took to Twitter to express his excitement.

He wrote: “Thank you for all the birthday love guys! Means a lot man! Turning 30 is a madness but I’m literally only just getting started!

“Cant wait to fully turn up tonight with my twin bro @adamthomas21 and all my favourite people! See everyone there 10pm sharp! Please don’t be late.”

During the party, the guests treated fans to a series of photos and videos as they danced the night away.

Amber, who was a contestant on last year’s Love Island, shared a snap with Scott.

She captioned the post: “Never a dull moment with my big bro. P.s. Get your hand out of my pocket.”

Scott also shared a string of photos and videos from the big night.

One snap sees him and former I’m A Celebrity… Get Me Out Of Here winner Vicky sharing a cuddle.

He captioned the pic: “Never lets me down @vickypattison.”

How did you celebrate your 30th birthday? Let us know what you think by leaving us a comment on our Facebook page @EntertainmentDailyFix!