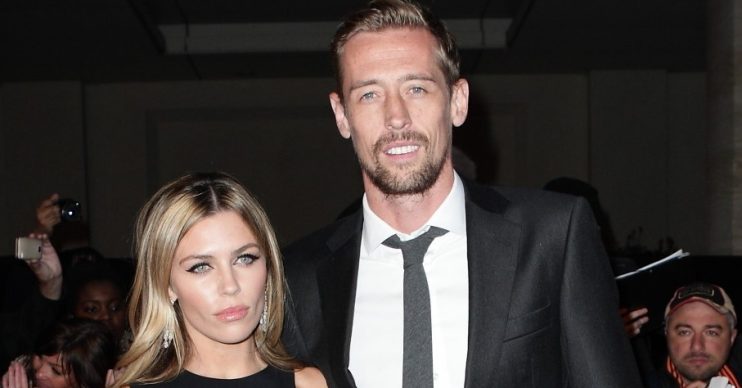 They were on a family holiday

Abbey Clancy has shared a sweet family picture with her husband Peter Crouch and all four of their children.

The couple are parents to Sophia, eight, Liberty, four, Johnny, one, and baby Jack, who was born last month.

Model Abbey took to Instagram recently to share a black-and-white image of herself, Peter and their kids at a restaurant on holiday.

The photo shows Peter pointing at the camera as Liberty sat on his lap while Abbey cuddled Sophia.

Johnny was seen looking at the camera in a high chair while baby Jack could be seen slightly in his pushchair.

Abbey captioned the post: “Trying to get a nice family pic #impossible.”

Fans gushed over the family image, with one person commenting: “Beautiful family!”

Another said: “Gorgeous!” while a third added: “Gorgeous photo guys love you all.”

Love you both x

Earlier this month, Abbey and Peter announced their baby son’s name following his birth on June 3.

The former footballer had previously joked that his fourth child was named after a Liverpool FC star player AND his favourite curry house, making him “Divock Samrak”, but Peter later confirmed he was kidding.

Peter, 38, – who recently retired from professional football– wrote in a column for the Daily Mail: “We have just welcomed our fourth child, Jack, into the family and the wonderful chaos that comes with a new baby means it hasn’t really hit me that I haven’t gone back for pre-season training.

The footballer announced his happy news of their new arrival last month, sharing a sweet picture of the tiny newborn on Twitter.