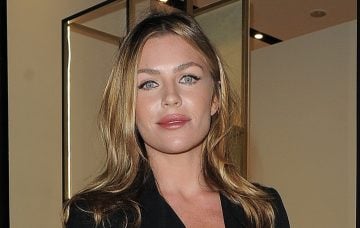 Abbey Clancy has given birth to a baby boy.

A thrilled Abbey shared her happy news with fans via Twitter today, posting a beautiful photo of her sleeping newborn.

She also revealed his name: Jonny.

Naturally, fans were quick to inundate Abbey and Peter with well-wishes.

One wrote: “Beautiful.. what a start to the new year a gorgeous growing family.”

Another said: “A massive congratulations to you all. Welcome to the world baby Johnny.”

A third added: “Awwwwwwww congratulations a lovely little boy to add to the family.”

Another cheeky fan joked Abbey and 6ft 7in Peter had left something important out of the birth announcement: the baby’s height!

Abbey and Peter are already parents to daughters Sophia, six, and Liberty, two.

Abbey, 31, and Peter, 36, let slip in June last year that a third baby was on the way, after Abbey was seen sporting a teeny tiny, barely-there baby bump on holiday.

Her pregnancy came just a few months after she admitted to being broody during an interview – but confessed it may take Peter some convincing to have a third in case it was another girl!

The star joked Peter was already outnumbered in their household and a guinea pig for the girls’ fashion and beauty experiments.

She told Daily Mail’s Weekend magazine: “I’m one of four children myself and we’re all like a big gang everywhere we go and I love that, so it’s natural to want to replicate that big sense of family.

“Every time we go out, everyone’s together and I just love it, I feel like you just don’t need anyone else.”

But she joked Peter was “done” with kids after “being given green eye shadow and having his nails painted pink and his hair put in bobbles by Sophia”.

She said: ‘That’s when I think he feels it would be nice to have a little boy just to watch football with. But he wanted girls; he loves girls and he loves the whole daddy’s girl thing.”