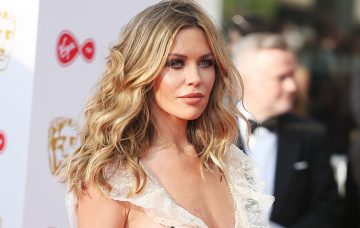 Abbey Clancy has found herself coming under fire from fans after sharing a picture of her three-year-old daughter Liberty Rose sucking on a dummy.

Abbey, 32, posted the snap on Instagram and it shows her middle child sitting in a pram with the bright blue pacifier in her mouth.

Writing alongside the shot, model Abbey told her followers that the pushchair is part of her latest ‘catwalk’ range for My Babiie.

But some fans were surprised the mum-of-three allows Liberty to still use a dummy at her age.

One wrote: A dummy??? Spend more time weaning her off that than getting the poor child to pose like a teenager. So wrong on so many levels.”

Another added: “How old is that child? Dummy in mouth!”

A third commented: “Bit old for a dummy don’t ya think #justsaying.”

Abbey has not responded to her critics, however she has received other messages defending her parenting decision.

One fan clapped back: “As parents we give our precious babies dummies to comfort them.

“I really do not understand the need to take them away until the child is ready if speech and teeth are not effected [sic].

“Both my children decided to give them up when they were ready, not when society told them to.”

Another supporter wrote: “People need to get a grip.. so what if the child has a dummy 🙄.

“My daughter was nearly 6 when SHE decided she was too big for it.. her speech is perfect and so are her teeth.”

Abbey has three children with her footballer husband Peter Crouch.

Along with Liberty Rose, the couple are parents to daughter Sophia, seven, and eight-month-old son Johnny.

While pregnant with Johnny, Abbey confirmed that their family unit would be complete once he was born.

She told OK! magazine: “I think this will be the last baby I have so I just want to embrace it.”

Abbey admitted she had been “very ill” throughout her pregnancy and the fact Liberty Rose wasn’t sleeping had put Peter off expanding their brood further.

She added: “I’d love more, but the second one doesn’t sleep at all – she’s up every hour so Pete’s like ‘no more babies just yet’.”