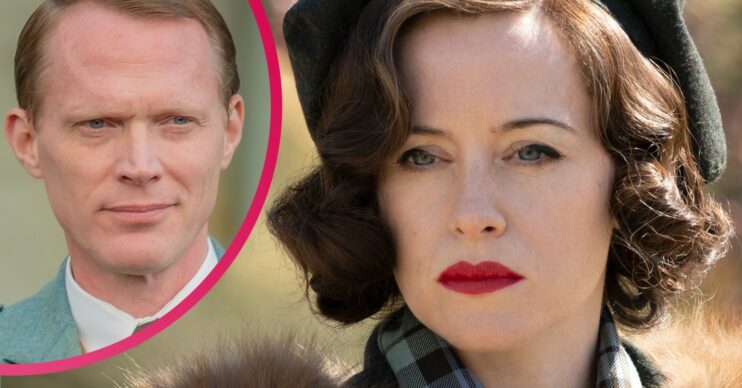 A Very British Scandal started with a bang this week – and we mean that quite literally – and episode one left us wanting more.

The first instalment also left us with so many questions about the naughty Duchess of Argyll and her temperamental husband, the Duke.

Here’s the pressing questions we want answering after watching the start of period drama A Very British Scandal on BBC One.

***Warning: spoilers from episode one ahead***

At the end of episode one of A Very British Scandal, Margaret Campbell née Sweeny is seen forging a letter.

She painstakingly drafts the note – and looks pretty damn smug about it too.

The letter read: “I love you so much.

“I am so happy that my sons are yours, not Ian’s.

In episode one, Margaret falls in love with the Duke’s ancestral home Inveraray Castle.

She’s later horrified to discover that she WON’T inherit the castle in the event of husband Ian’s death.

Instead, his two sons – quite rightly! – become entitled to the country pile.

Margaret’s letter is clearly an attempt to disinherit Ian’s kids by questioning their legitimacy.

And that is as low as you can go!

Will she get away with it?

Was the Duchess of Argyll punished for being a woman?

The three-part series clearly aims to highlight how a woman is punished in a different way to a man.

Talking about the project, actress Claire Foy – who plays the Duchess – said: “I’m so excited to work on this extraordinary project, and to explore through this story how often shame, judgment and controversy surrounds a woman’s sexuality.”

The so-called “Dirty Duchess” made headlines in the 1960s, when her ex-husband claimed she had slept with 80 men during their marriage – including three members of the Royal Family

In court, the 11th Duke of Argyll circulated a list of 80 men she had reportedly slept with during their relationship.

As he granted the divorce, the judge said that she “was a completely promiscuous woman whose sexual appetite could only be satisfied with a number of men”.

The series look at the Duchess’ case, but asks if institutional misogyny was widespread in Britain in the post-war era.

Dominic Treadwell-Collins, the show’s Executive Producer, told the Radio Times: “The Duchess of Argyll was the first woman to be publicly slut-shamed.”

Writer Sarah Phelps said: “I felt very strongly that Margaret had been punished for being a woman, for being visible, for refusing to back down, be a good girl and go quietly. This drama is my tribute to her.”

Read more: Who is in The Crown season 5? Full cast list so far as Netflix series changes line-up

A Very British Scandal episode one: Where is the Duke’s home Inveraray Castle?

One of the stars of A Very British Scandal on BBC One is Inveraray Castle, the ancestral home of the Duke of Argyll.

We’re pretty sure Margaret falls in love with the castle more than her husband Ian Campbell.

But where are the scenes filmed?

In fact, the scenes are filmed at the real Inveraray Castle.

Inveraray Castle is a country house near Inveraray in the county of Argyll, in western Scotland, on the shore of Loch Fyne, Scotland’s longest sea loch.

It is one of the earliest examples of Gothic Revival architecture. It has been the seat of the Dukes of Argyll, chiefs of Clan Campbell, since the 18th century.

Claire Foy stayed at a holiday let cottage on site during filming, as she wasn’t allowed to stay inside the castle because of Covid restrictions.

What happened to the Duke in WWII?

While courting the Duke-to-be, Margaret learns that Ian had “suffered terribly at the hands of the Nazi’s”.

So what happened to him?

During the Second World War, Ian Campbell was in the armed forces.

He spent some time as a prisoner of war after being captured with the Highland Division in France in 1940.

He remained in a German POW camp until 1944.

In a later episode, we learn that his capture made him feel less of a man.

A Very British Scandal episode one: Are we supposed to LIKE Margaret?

In episode one, Margaret appears hard to like – not because she likes sex, though!

She is seen actively pursuing a married man which breaks the girl code, and is clearly mercenary when it comes to getting what she wants.

We’re all for girl power and chasing your dreams – but using underhand tactics to disinherit two young boys? Not so much.

She’s good at spending “daddy’s millions” and keeps a scrap book on herself.

But then episode one has barely scratched the surface of her character.

Scenes with her mum Helen Whigham show a rather unpleasant and bitter woman.

She tells Margaret her beautiful engagement ring “looks like it’s from Woolworths”.

In all truth, though, whether we like her or not, she’s a fascinating character.

What happened to Margaret’s head?

During intimate scenes between Margaret and Ian, we learn that Margaret carries an old wound.

She tells him she has had 30 stitches in her head.

So what happened to her?

We’ve discovered that, in 1943, Margaret fell 40ft down a lift-shaft, landing on her knees.

She had to have 30 stitches in her head.

Her olfactory nerve was damaged and she lost all sense of taste and smell.

Margaret is said to have enjoyed sexual relationships with many prominent figures, including important political figures and even royality.

They were on holiday at Bembridge on the Isle of Wight.

To the fury of her father, she became pregnant as a result.

Margaret was rushed into a London nursing home for a secret termination.

Margaret didn’t mention the episode in her 1975 memoirs, but she continued to adore the actor David Niven until the day he died.

She was among the VIP guests at his London memorial service.

Were the Duke and Duchess ever really in love?

In truth, we’ll never know the answer to this question.

There certainly seemed to be sexual chemistry between the pair.

However, many other factors seemed to be at play.

Margaret clearly loved Ian’s ancestral home Inveraray Castle and dreamt of getting her hands on it.

She also loved the thought of being a Duchess, too, and the infamy that came with that.

Ian, meanwhile, appeared to want Margaret’s dad to fund his mission to raise a sunken ship.

A Very British Scandal continues on Monday December 27 and Tuesday December 28 2021 at 9pm on BBC One. Episode one is currently on BBC iPlayer.

Did you enjoy episode one of A Very British Scandal? Leave us a comment on our Facebook page @EntertainmentDailyFix.