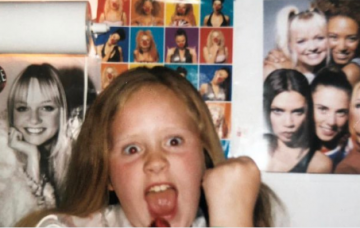 Everyone's hoping the singer will join them on stage

For anyone out there who thought they were the most excited about the Spice Girls reunion tour – you hadn’t reckoned on super-fan, Adele.

The A-list singer took to Instagram on Monday night to share her unparalleled enthusiasm, with an amazing throwback picture of herself as a child, surrounded by Spice Girls posters.

Adele has always been open about her Spice obsession, even performing Spice Up Your Life on her 2016 tour.

DOES THIS MEAN THAT WE ARE GETTING A BACKSTAGE PICTURE OF ADELE AND THE SPICE GIRLS pic.twitter.com/US8qg8aNbm

She also admitted in 2012 that as a child, she used to “do Spice Girl concerts for all my family and their friends.”

Fans matched Adele’s excitement, at the prospect of 2 Becoming 1 backstage.

One tweeted: “DOES THIS MEAN THAT WE ARE GETTING A BACKSTAGE PICTURE OF ADELE AND THE SPICE GIRLS?”

Another fan suggested the 30-year-old could cover the missing fifth Spice Girl, as Victoria Beckham won’t be joining her bandmates.

They wrote: “There’s been a lot of [bleep] news today and what I’m choosing to think about right now is how Adele should be the fifth Spice Girl in #SpiceWorld2019.”

A third added: “@Adele is me. I am @Adele #SpiceGirls #FriendshipNeverEnds.”

Four out of five of the Spices made the epic and much (and we mean MUCH) anticipated reunion announcement on Monday, with a hilarious video they released on Twitter.

In it, we see Geri Horner, Emma Bunton, Mel C and Mel B bickering over their outfits ahead of the announcement.

Later on, Victoria Beckham released her own statement about it.

She said: “Being in the Spice Girls was a hugely important part of my life and I wish my girls so much love and fun as they go back on tour, I know they will put on an amazing show and the fantastic fans past and present are going to have a wonderful time!”

They will also be joined by singer Jess Glynne, who tweeted her own excitable message about the news, writing: “ARE YOU MAD! I’m Joining @spicegirls ON TOUR! Y’all best come through cause this stadium tour is gonna kick OFF! 💙.”

The iconic band will first perform on June 1 at the Etihad Stadium in Manchester, before heading to the Coventry Ricoh Arena on June 3 and Sunderland Stadium Of Light on June 5.

Imagine if Adele stands in on stage for Posh Spice, IMAGINE THAT. Either way, we can’t wait to see the Spice Girls doing their thing.

Are you anywhere near as excited as Adele? Leave us a comment on our Facebook page @EntertainmentDailyFix and let us know what you think.