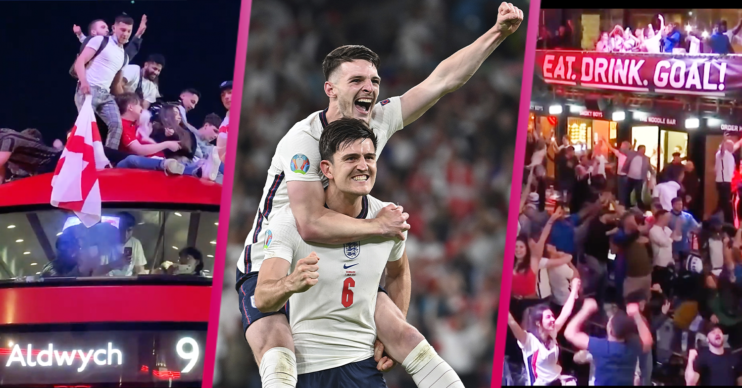 England sailed into the Euro 2020 final last night (July 7) and the nation most certainly celebrated in style.

From the terraces of Wembley to the streets of the capital, football fans were out in force – and will no doubt be nursing one hell of a hangover today.

Social distancing and COVID appeared to be the last thing on the minds of many as fans cheered, sung and hugged in the streets.

And, if this is how the country celebrated last night, just imagine what’ll happen on Sunday (July 11) at the Euro 2020 final, should it be that football actually does come home…

The England manager perfectly summed up the mood of the nation as the final whistle blew last night.

He looked nothing less than jubilant – vindication, at last, for that penalty miss all those years ago.

With the final looming it’ll be back to business for Gareth and the team today.

Over here, however, we’ll be busy starting a petition for the manager to get a knighthood.

Celebrations kick off at Wembley

With crowds allowed back inside the stadium, the mood was electric as extra time came to an end.

England shirts, lion fancy dress and the flag of St George flew as fans roared the words to the Baddiel and Skinner classic.

Meanwhile, elsewhere in London, crowds were also in a jubilant mood.

Piccadilly Circus saw football fans clambering on red phone boxes as Kane‘s penalty hit the back of the net.

They had been watching the action from the fan zone in Trafalgar Square.

Traffic comes to a standstill in London

People were seen draped in flags and heard singing football songs at the top of their voices.

Flags and football shirts could be spotted among the sea of jubilant England fans.

One or two were even wearing a mask!

The sign on the wall read “Eat, Drink, Goal” and that’s exactly what happened at Boxpark last night.

DJ Spoony provided the tunes ahead of the game to get supporters in the mood.

Then it was time to watch the game on the big screen.

The Boxpark celebrations were so wild that they even featured on the news!

In his chainmail suit and draped in an England flag, one football fan most definitely got into the swing of things last night.

We can’t wait to see what he wears on Sunday for the final!

Love him or hate him, last night we were mostly insanely jealous of Piers Morgan as he had a seat at Wembley Stadium for the match.

The former Good Morning Britain host uploaded what is perhaps the most happy picture we’ve ever seen of him!

“Boom!’ he captioned it.

We wonder how the hangover is today…

Holly’s tears as England head into the Euro 2020 final

Holly Willoughby was also in a celebratory mood today ahead of This Morning.

Last night she shared a selfie of herself with a Gareth Southgate cutout.

This Morning she shared her usual outfit selfie and revealed she “cried” every time a goal went in!

Head to our Facebook page @EntertainmentDailyFix and tell us how you celebrated.