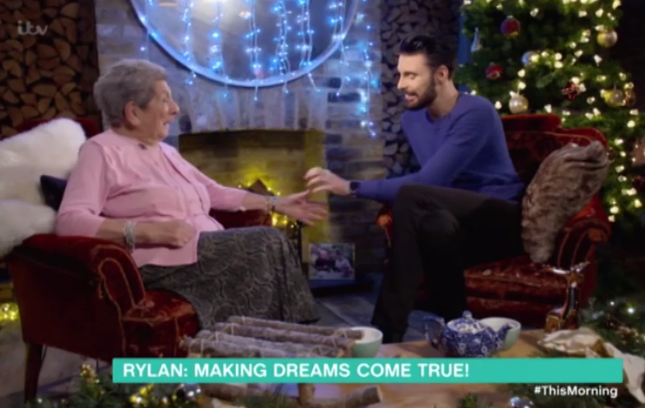 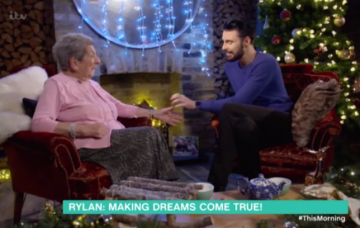 Trip of a lifetime for pensioner

Christmas may be pretty much over, but Rylan Clark-Neal had a very special present for an 89-year-old war hero on today’s This Morning.

As part of the show’s ‘Never Too Late’ series, the presenter called in on Muriel Dindol, who was once the youngest code-breaker at Bletchley Park, starting there at the tender age of 14.

The pensioner – who’s been diagnosed with acute kidney failure – was expecting to be interviewed about her amazing life. But Rylan had other ideas.

In an emotional exchange that had everyone turning on the waterworks, the host revealed that he was going to grant Muriel’s last wish of traversing Britain by luxury steam train.

The 29-year-old told her: “You think you’re here to have a little chat with me but, Muriel, you’re not.

“I’ve already chosen you, and I’m going to send you on that luxury stream train. You’re going to be going all around the British countryside. I know it’s something you’ve always wanted to do.”

As Rylan broke the amazing news, Muriel looked visibly stunned. Holding her hand to her mouth, she cried: “I have. And I want to do it before the end. I don’t believe it!”

She then told the host: “I want to give you a cuddle.”

Read more: Rylan hits out at trolls, warning of damage they are doing to victims

Well, OF COURSE Rylan was only too happy to oblige. The loveable Essex lad stood up, walked over to Muriel and gave her a massive hug.

And after a VT showed the pensioner embarking on her trip of a lifetime, viewers took to Twitter in a blubbery mess.

One fan gushed: “Fantastic to see an Amazing Lady get her final wish. Great job, Rylan, had tears in my eyes.”

Another agreed: “What a wonderful surprise for a beautiful lady. Well done @Rylan and @ThisMorning. Brought a tear or two.”

And a third wrote: “@ThisMorning has broken my heart. What a diamond Muriel is. Tears in full flow!”

Muriel was joined on the train journey by her daughter Dianne, as her husband has passed away. The couple were together for 56 years.

The steam ride included a five-course meal, along with entertainment provided by magicians and singers.

As for Rylan, he announced just before Christmas that he’s taking a break from presenting This Morning.

However, the Celebrity Big Brother: Bit On The Side host reassured viewers that he’ll be back soon, quipping: “I’m like an STD – I’ll always come back.”

He’s full of surprises, that one!