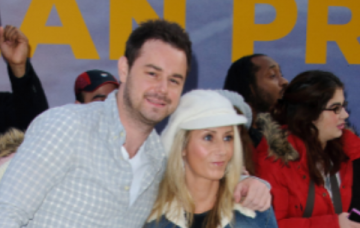 He's admitted to the "downs" he's caused in their relationship

Danny Dyer has said that he wants to renew his marriage vows with wife Jo Mas, after a turbulent time.

But he wants to walk daughter Dani up the aisle and see her tie the knot beforehand.

Speaking to the Mirror, the EastEnders star held his hands up to not being the best husband at times, and has been the subject of cheating rumours in the past.

However, he says age and experience have taught him to shape up.

“Young men, and I was guilty of it myself, you don’t quite know about loyalty and commitment and you just sort of go with whatever your head is telling you and it’s not the best decision to make. But you’ve got to learn that from a young age,” he said.

“Me and Jo are going to be together for ever. Abso-{BLEEP!]-lutely. Completely. We will probably renew our wedding vows. I want to see my Dani tie the knot first, whenever that will be.

“We’ve gone through a lot me and Jo. I take full responsibility for most of our ups-and-downs. Most of the downs, really.”

Earlier this week, Danny dispensed some advice to Dani about not settling down too soon.

She and Love Island boyfriend Jack have decided to move in together and have already discussed getting married.

Danny and Jo welcomed Dani when they were both 20… and he’s urged his first-born to wait.

The actor told the Daily Star: “As much as I love Dani, and of course I’m overjoyed we had her, I would advise her to have children later on in life.

He added: “It was a 24-hours-a-day thing – the baby put a lot of stress on our relationship.”

But the proud dad said he trusts his daughter and described her as a “loving girl” who has “got her head screwed on right”.

The couple were crowned the Love Island 2018 winners on Monday night.

Would you like to see Dani and Jack get married? Leave us a comment on our Facebook page @EntertainmentDailyFix and let us know what you think!