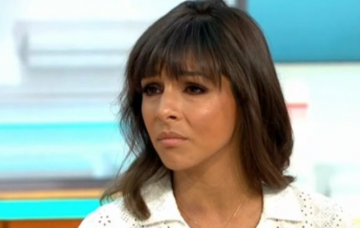 Roxanne Pallett has told of the pain she is feeling days after being airlifted to hospital following a stock car racing crash.

And she has revealed that she has received unkind messages on social media about the accident.

The former Emmerdale star, who has sprained wrists and internal bruising after the car she was driving crashed into a concrete wall in North Yorkshire last Wednesday, told ITV’s Good Morning Britain: “It’s something you never expect to happen to you and it’s just a bit of a blur still, to be honest.

“I’m so dosed up on painkillers, I’m almost grateful to be this numb.”

The actress was taken by helicopter to Hull Royal Infirmary after firefighters spent two hours cutting her from the wreckage of the vehicle.

She said she was in the car for a day of filming a promotional video for her breakfast show on Minster FM, and quickly realised it was “more powerful than me”.

The 36-year-old said: “When I was revving to drive I didn’t expect it to be so quick, and I just lost control.

“I couldn’t brake and I couldn’t turn it around the corner and I could just see that I was about to hit and then was when I lost … I just blacked out.”

She said the moment she woke up after losing consciousness for around 30 seconds, she “couldn’t feel my legs and my head and my neck” and that she had “never felt pain like it”.

Roxanne praised the team at the Hunmanby Raceway for making sure she was wearing the correct protective gear.

She also said she has had some unkind messages that were “lacking in compassion” from people within the stock car racing community.

She said: “They were almost disappointed that I’d been airlifted and only come out with internal bruising and sprained wrists, and I’ve got to point out that sometimes injuries can be invisible.

“I mean, my head doesn’t feel right, I can barely stretch my ribs and my back, they’re so sore.

“There are people walking around with injuries and disabilities that are invisible to the eye, and I think everyone needs to remember that.”

She said “it was like time stood still” after the crash and while still stuck in the wreckage.

“I remember waking up and hearing my own breath, I was so out of breath and I could feel my heart racing,” she said.

“Then I could hear voices, and I must have had my eyes closed… I just kept drifting in and out of consciousness, they were talking to me, they got my boyfriend Lee on the phone to me.

“I still had the helmet on, had this numb blocked-up feeling in my head like there was water in my head, like my brain had rattled and I couldn’t really hear much, I couldn’t feel much either,” she said.

“But Ben Fry, my co-host, was relaying messages from Lee to try and keep me awake… I was just trying to fight the tiredness, I just wanted to go to sleep.”

Roxanne, who is best known for starring as Jo Sugden in Emmerdale from 2005 until 2008, revealed that she was back behind the wheel of her own car on Sunday with her partner.

“I’ve learnt from previous experiences if you don’t get back out there after something goes wrong, it’s even harder the longer you leave it,” she said.

Have you received abuse from trolls?