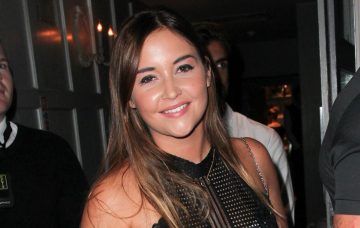 Former soap star wants to get back into work soon

Jacqueline Jossa has said she won’t have any more children after giving birth to her second child.

The former EastEnders actress is 32 weeks pregnant with baby number two and has vowed she won’t be trying for a third child in the future.

When asked by New! magazine if she’d like another, she replied: “Oh, God, no! I want to get back into work, so I can’t be having any more babies. I haven’t got time for that, no.”

Jacqueline, 25, added that she can’t wait until she gives birth to baby number two.

Jacqueline and husband Dan Osborne have found out the sex of the baby, but aren’t making that public.

The couple’s marriage has been making headlines over the past week, amid allegations of a rocky patch that has led Dan to temporarily move out of the family home.

Both Jacqueline and Dan, however, have urged fans not to believe everything they read, insisting they are working through things and no-one knows what happens behind closed doors.

Jacqueline recently told OK! magazine: “People shouldn’t jump to any conclusions and I’m in the last few weeks of my pregnancy so I don’t need the stress.”

She has also said Dan will be with her in the delivery room when she gives birth.

“Dan will be with me. I’m going to stick to who I had last time, so I just had my mum and Daniel,” she said. “I might have Daniel’s mum, it just depends where we all are.”

Jacqueline also briefly spoke about the marriage speculation during an appearance on Loose Women on Friday.

She said: “I’m good, I honestly am fine.

“I think when stuff goes on at home, it’s not normal to be everywhere and it’s not necessarily true, all the reasons why you’re not getting on at the moment, so that’s all I really want to say. I’m good, I’m all good.”

Dan, meanwhile, has hit out at claims his busy working schedule – including a recent boot camp in Marbella – led to tension in the marriage.

The boat remark was in reference to photos showing him chatting with Love Island’s Gabby Allen on a yacht in Marbs.

Dan added: “Whenever a relationship goes through tough times etc.. why is it always the man that gets stick..? When in ‘public eye’, worst part is, the people trying to give me stick etc are people that DO NOT KNOW ME, do not know the situation.. so can please [bleep] off…. appreciated.”

Jacqueline and former TOWIE star Dan began dating in 2013. They married in a star-studded ceremony in Cheshire in June 2017.

Do you miss Jacqueline on EastEnders? Leave us a comment on our Facebook page @EntertainmentDailyFix and let us know what you think!