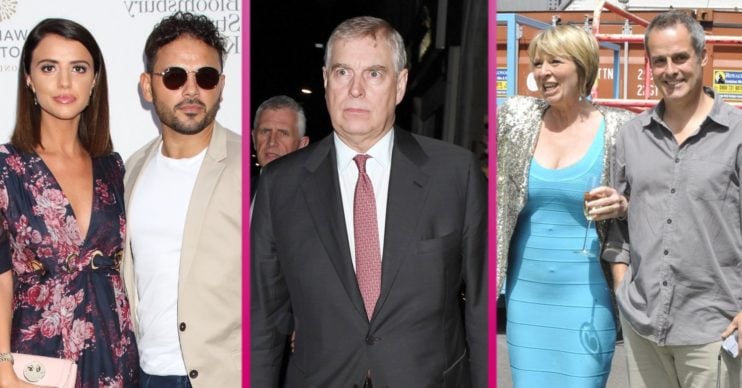 It's certainly been a rollercoaster year for our celebrities!

It’s safe to say 2020 has been an eventful year for showbiz.

And while the past 12 months have brought us plenty of joyous celebrity moments, there have been some scandalous headlines too.

From babies and break-ups to bad behaviour, we take a look back at this year’s most eventful stories.

Although it’s been a tough year, that hasn’t stopped some of our favourite stars welcoming new arrivals.

Back in February, Robbie Williams and Ayda Field introduced a fourth child – their second via a surrogate.

The couple announced the news on Instagram, revealing they had called their son Beau Benedict Enthoven.

Gogglebox favourite Izzi Warner gave birth to her daughter Bessie Rose in the same month, while Ola and James Jordan introduced baby Ella into the world.

Ashley Banjo took time out of his busy schedule after becoming a dad for the second time in March.

The Diversity star and his wife Francesca welcomed a baby boy called Micah.

Ronan Keating opted for the name Coco for his adorable baby girl, while Boris Johnson went for something slightly more traditional for son Wilfred.

Sheridan Smith gave fans a glimpse into her pregnancy journey, as she prepared to welcome her first child with fiancé Jamie Horn.

The star gave birth to a healthy baby boy in May, with the couple naming him Billy.

A busy year for babies

As for new dad Dermot O’Leary, the presenter and his wife Dee Koppang welcomed a baby boy called Kasper in June.

Ed Sheeran and his wife Cherry Seaborn also became parents, while Corrie star Sam Aston was overjoyed to announce his partner Briony had given birth to a boy called Sonny.

It was also a happy year for our favourite reality stars, including Lucy Mecklenburgh, Lydia Bright, Camilla Thirlwall, Millie Mackintosh and Vogue Williams.

The world of showbiz has treated us to a series of splits in the past year.

Fern Britton and Phil Vickery kicked off the year on a sad note after announcing they’d split after more than 20 years together in January.

Fern said: “After more than 20 happy years together, Phil and I have decided to go our separate ways. We will always share a great friendship and our lovely children.”

Her agent told the Mirror: “I can confirm Candice and Liam separated earlier this year.”

Following in her footsteps was actress Nikki Sanderson, who split from her boyfriend of five years Greg Whitehurst.

The former couple, who dated for 18 months, had even spoken about marriage and babies.

The pressures of lockdown also got to Boyzone star Shane Lynch and his wife Sheena White, while Corrie’s Lucy Fallon called it quits with boyfriend Tom Leech.

Meanwhile, Hollyoaks actress Jennifer Metcalfe promised to stay friends with her ex Greg Lake, with the couple splitting in August.

It’s also been an explosive 12 months for a certain few celebrities.

The year started out with a royal sized help of drama, as Prince Harry and Meghan Markle revealed they were stepping down from royal life.

Dubbed “Megxit,” the shock move saw the couple relocate to Los Angeles with their one-year-old son Archie and sign a number of big money deals.

Following his car-crash interview with the BBC at the end of 2019, the next year was just as dramatic for Prince Andrew.

Katie Price was also faced with a rollercoaster year after breaking both of her feet in a freak accident in Turkey, as well as losing her puppy Rolo.

Meanwhile, the Prime Minister’s senior aide Dominic Cummings was forced to resign after he drove from London to County Durham despite strict lockdown restrictions.

Actor Laurence Fox made headlines following a row about the Black Lives Matter movement, while Good Morning Britain’s Piers Morgan racked up more than 4,000 Ofcom complaints while presenting on the ITV show.