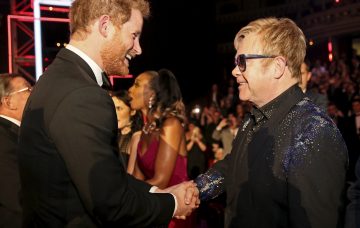 2018 Royal Wedding Guide: Who will be attending?

All you need to know

Prince Harry and Meghan’s wedding invitations were printed on March 22.

The invitations were produced by Barnard & Westwood, a company which has held a Royal Warrant for Printing and Bookbinding by Appointment to Her Majesty The Queen since 1985.

They were also awarded a second royal warrant for printing by the Prince of Wales in 2012.

The invitations follow many years of Royal tradition and have been made by @BarnardWestwood. They feature the Three-Feathered Badge of the Prince of Wales printed in gold ink. pic.twitter.com/cd7LBmRJxO

Using American ink on English card, the invitations are printed in gold and black, then burnished to bring out the shine, and gilded around the edge. pic.twitter.com/gQpC6tDot0

On the invitation, the royal couple did acknowledge the fact that Markle has been divorced once before. For a first marriage, the bride-to-be would traditionally be addressed as “Miss,” but in this case, “Miss” was replaced with “Ms.”

How many guests will be attending the royal wedding?

600 guests have been invited to the church service at St George’s Chapel and the lunchtime reception at St George’s Hall, which will be hosted by the Queen.

Later that evening, 200 guests will attend a private reception hosted by Prince Charles at Frogmore House.

Kensington Palace announced in March that Prince Harry and Meghan have invited 2,640 members of the public to the grounds of Windsor Castle to “watch the arrivals of the bride and groom and their guests.”

Prince Harry and Ms. Meghan Markle will invite 2,640 members of the public to Windsor Castle on their wedding day to watch the arrivals of the Bride and Groom and their guests and the carriage procession as it departs from the castle. pic.twitter.com/pII5T4Ctcm

The couple have also asked Lord Lieutenants to invite 1,200 people who have served their communities, a futher 200 people from charities and organisations that the couple have a close association with and 100 pupils from two local schools.

Finally, 610 Windsor Castle community members will attend as well as 530 members of the Royal households and Crown Estate.

Which celebrities are attending the royal wedding?

While nothing has been officially announced regarding which famous faces will be attending Prince Harry and Meghan’s wedding, there are some celebs rumoured to be top of the guest list.

Elton John was good friends with Prince Harry’s late mother, Princess Diana, and performed “Candle in the Wind” at her funeral in 1997.

Back in February, Elton rescheduled his concerts that were planned the same weekend as Harry and Meghan’s nuptials, which caused many fans to speculate that the singer may be making an appearance at the wedding.

During an appearance on American talk show The Real in February, Mel B appeared to drop a huge hint that the Spice Girls may be attending the royal wedding.

She revealed herself and her fellow bandmates have received invitations to the nuptials.

“Yeah I’m going,” she quietly mouthed during the show. “I don’t know if I should’ve said that.”

After starring in seven series of US legal drama Suits, Markle has built a close friendship with her former colleagues so it’s likely they could be attending the royal wedding to watch their pal say “I do.”

Meghan is good friends with her on-screen partner Patrick J. Adams and her former co-star Sarah Rafferty, so we may see them at the nuptials.

A host of Meghan’s co-stars arrived in the UK in the week leading up to the wedding, including Gabriel Macht and Jacinda Barrett.

Which world leaders will be there?

Kensington Palace announced that Prince Harry and Meghan have not invited political leaders to their wedding.

“It has been decided that an official list of political leaders — both UK and international — is not required for Prince Harry and Ms. Markle’s wedding,” the statement read. “Her Majesty’s Government was consulted on this decision, which was taken by the royal household.”

This means Prime Minister Theresa May and US President Donald Trump won’t be attending the wedding.

Which of Harry’s ex-girlfriends will be attending?

It’s been reported that Cressida Bonas is the only one of Harry’s ex-girlfriends attending his wedding to Meghan.

However, one of Harry’s other exes Chelsy Davy has reportedly been “snubbed” from the royal weeding reception.

A source told the Daily Mail in May that Chelsy is “shocked” and “a little hurt” that she hasn’t received an invite to the evening reception at Frogmore House.

Which of Meghan’s family members are expected to attend?

Kensington Palace announced in May that Meghan’s mother, Doria Ragland, will be attending the wedding.

Doria will travel with Meghan by car to Windsor Castle on the big day.

However, Meghan’s father, Thomas Markle, will not be attending the nuptials.

Thomas reportedly underwent heart surgery on May 16 after apparently suffering a heart attack.

On May 17, Meghan released a statement via Kensington Palace saying: “Sadly, my father will not be attending our wedding.

“I have always cared for my father and hope he can be given the space he needs to focus on his health.

Meanwhile, Meghan’s half-sister Samantha Markle, who has been opening critical of Meghan, said she hasn’t been invited to the wedding.

During an appearance on Loose Women on May 14, Samantha said she’s “not taking it personally”.

When asked if she was hurt about not receiving an invite, Samantha added: “I would be lying to say we weren’t.

“For some of us the travel is not very easy. I am in a wheelchair. I had to evaluate even if I had been invited, it would have been a bit difficult.”

Samantha added that she will still be watching the nuptials on the day.

Meanwhile, Meghan’s half brother, Thomas Markle Jr., said he hasn’t received an invite to the wedding either.

“I haven’t got an invite yet but I do expect to get one,” he told Daily Mail. “It would be really nice [to get an invitation] and it would mean a lot.

“I do expect one and I’m looking forward to going. I don’t see why not. It is what it is. I am family, estranged or not.”

Will the Duke and Duchess of Cambridge bring the baby Louis?

The couple welcomed a second son, His Royal Highness Prince Louis of Cambridge.

It’s unlikely the newest edition of the royal family will be attending the wedding.