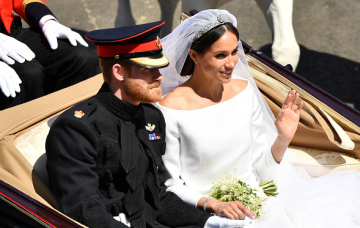 Royal Wedding: All about the reception

Harry and Meghan will be celebrating in style!

With the official bit behind them, the new Duke and Duchess of Sussex can concentrate on the serious business of having some fun with their nearest and dearest.

While the pubic were invited to share in the ceremony, Harry and his bride will celebrate their reception in privacy – and in style.

Here’s everything we know about what they’ll get up to!

What is planned for the reception?

Following their ceremony at St George’s Chapel and their carriage parade around the town of Windsor, Prince Harry and Meghan will have their first reception at St George’s Hall, a room within Windsor Castle.

Approximately 600 guests have been invited to the ceremony and then the reception, which is being hosted by the Queen.

Later that evening, Harry’s father Prince Charles will give a private reception at Frogmore House for the couple and 200 close friends and family members.

Which cake will they have?

Prince Harry and Meghan’s cake has been made by pastry chef and owner of London-based Violet Bakery, Claire Ptak.

Kensington Palace announced that Claire will be creating a “lemon elderflower cake” for the couple.

Harry and Meghan asked Claire to incorporate the “bright flavours of spring” for their wedding.

The cake will be “covered with buttercream and decorated with fresh flowers”.

Claire, who was raised in California, focuses on using “seasonal and organic ingredients” in her cakes.

Claire said in a statement: “I can’t tell you how delighted I am to be chosen to make Prince Harry and Ms Markle’s wedding cake.”

Harry and Meghan’s choice to have a lemon elderflower cake goes against tradition as royal wedding cakes are typically fruitcake.

What will guests dine on at the breakfast?

Keeping with royal tradition, Harry and Meghan’s ceremony at St George’s Chapel will be followed by a wedding breakfast – a dinner given to the newlyweds and their guests at the wedding reception.

Typically include lobster, lamb and champers.

The exact wedding breakfast menu is most certainly under wraps, but one thing that has been announced is quite unconventional… guests will enjoy ‘bow’ food’ rather than sitting down for a meal.

What about the speeches?

Traditionally only the groom, father of the bride, and the best man make speeches at British wedding receptions.

But, Meghan will reportedly break that tradition and is planning to deliver a speech of her own at her wedding to Prince Harry.

According to the Telegraph, her speech will offer “affectionate” praise of her new husband and thanks to the Queen, her family and friends as well as including some jokes.

A source told The Sunday Times: “The feeling is if Meghan’s father doesn’t speak for her, she wants to have the chance to thank her husband and everyone who has supported them. Harry thinks it’s a great idea.”

It’s almost certain Prince William will deliver a speech during one of the receptions on their big day because he is Harry’s best man.

On the Duke and Duchess of Cambridge’s wedding day, Harry paid a moving tribute to his brother during a heartfelt speech at their evening reception.

What will be Prince Harry and Meghan Markle’s first dance?

It’s not yet known which song Harry and Meghan will choose for their first dance.

Shortly after the couple announced their engagement, Kensington Palace said their wedding will “reflect the characters of the bride and groom”.

So, who will be given the chance to sing in front of royalty?

One singer that has been rumoured to be hired as the couple’s wedding singer is Ed Sheeran.

In 2017, 1 in 7 couples chose his hit song Thinking Out Loud for their first dance tune.

Ed has a royal seal of approval as he was awarded an MBE by Prince Charles in December 2017 for services to charity and music.

One possible song that the couple could dance to is Whitney Houston’s I Wanna Dance With Somebody.

In an interview with Lifestyle magazine in 2016, Meghan expressed her love for the song: “When I’m happy I listen to Whitney Houston, ‘I Wanna Dance With Somebody.’ Such a good song!”

Her wedding day will undoubtedly be the happiest day of her life, so it could be put on the wedding playlist.

Will the Spice Girls be performing?

There are rumours the Spice Girls will be bringing some spice to Prince Harry and Meghan’s wedding.

During an appearance on American daytime show The Real in February, Mel B appeared to drop a huge hint that the Spice Girls could be performing at the reception.

She was asked by co-host Loni Love if she knew anyone who would be attending and she quietly replied: “I’m going.”

The panel went wild and Loni asked the singer if the Spice Girls would be performing.

“I swear I’m just like…” she started, before Loni jumped in and said: “Yes, they are performing! Yes!”

“I need to go,” Mel B said, throwing the papers she was holding into the air. “You’re going to get me fired! Let’s not talk about it anymore. Let’s pretend that I never said that.”

But fans’ dreams may be shattered as Mel C (a.k.a Sporty Spice) said Mel B was probably making a joke.

“I think [Mel B] was joking,” she told E! News. “I think the media ran with it a little bit. My invite hasn’t turned up yet.”

No, Prince Harry and Meghan have asked people to consider donating to a charity rather than give them a wedding gift.

According to a statement released by Kensington Palace in April, the couple have “personally selected” seven organisations they would like to support.

The pair have chosen charities which represent a range of issues that they are “passionate” about, including “sport for social change, women’s empowerment, conservation, the environment, homelessness, HIV and the Armed Forces”.

Prince Harry & Ms. Meghan Markle are incredibly grateful for the goodwill they have received since their engagement, & have asked that anyone who might wish to mark the occasion of their wedding considers giving to charity, instead of sending a gift. https://t.co/lzfrRmoeUv pic.twitter.com/nxrTZtIKBY

The Duke and Duchess of Cambridge did the same for their 2011 wedding and managed to raise more than £1 million for their chosen charities.

What are the wedding favours?

It’s believed Prince Harry and Meghan Markle will spend around £3,000 on wedding favours.

It’s unclear what gifts the couple will give as a gesture of appreciation to their guests, but Harry and Meghan will undoubtedly take the time to think of the perfect present.

Prince William and Kate Middleton chose to gift their guests with limited-edition scarves custom-designed by Centex, a posh apparel company based in India, inscribed with “April 29th, 2011: William and Kate”.

When will we see a royal kiss?

The Duke and Duchess of Cambridge’s smooch on the balcony of the Buckingham Palace was one of the most memorable moments from their 2011 wedding, but we’ve already been treated to Meghan and Harry’s… the the steps of St George’s Chapel at Windsor Castle!

Is there memorabilia available to buy?

Yes! The Royal Collection Trust has unveiled a range of cornflower blue china that will be sold at the Queen’s Gallery shop at Buckingham Palace.

Pieces that will be available to buy will include a set of tea cups decorated with Harry and Meghan’s initials in 22 carat gold. Tea cups are priced at £25.

And if you want to make a toast to the happy couple, you can buy a royal wedding miniature bottle of champagne for £19.95.