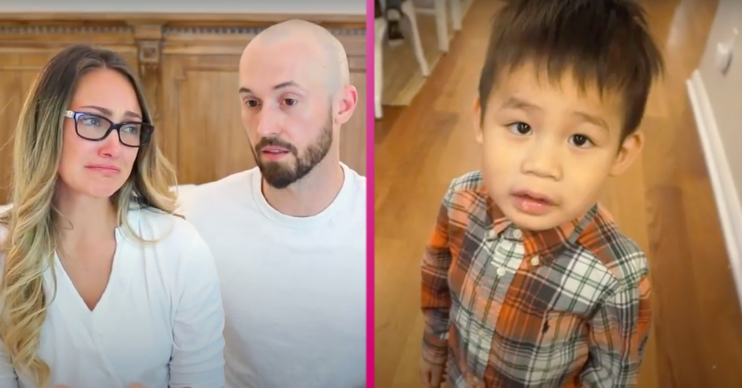 Myka Stauffer's been branded "evil" for "rehoming him like a dog"

American YouTube star Myka Stauffer has revealed she has “rehomed” the four-year-old boy she adopted from China three years ago.

Myka revealed she and husband James decided to give him up after discovering he had “a lot more special needs that we were not aware of”.

The couple became parents to Huxley back in 2017.

Admitting they have decided to give the boy up, she said: “Do I feel like a failure as a mum? Like 500%.”

She revealed an adoption agency has now placed Huxley – who also has a brain cyst – with his “his new forever family”.

Read more: Restaurants could reopen next month with diners eating behind plexiglass bubbles

She added: “They found someone who is the best fit. He’s thriving, he’s doing really well, and his new mummy has medical, professional training. And is a very good fit.”

A tearful Myka added: “We never wanted to be in this position, we wanted to get his needs met and to help him out as much as possible. We truly love him.”

I’m sorry but you did fail as a mum. You wouldn’t have given up your own child.

She concluded: “We are going to be heartbroken for a very long time.”

The “unknowns” of international adoption

James added of his wife: “I can’t say how hard Myka has tried throughout this entire journey.”

He added: “With international adoption, sometimes there are unknowns and things that are not transparent on files. Once Huxley came home there were a lot more special needs that we weren’t aware of and not told.”

However, although the couple pleaded with Myka’s followers to “be kind”, the comments inevitably came.

Some even accused her of using the adoption to boost her YouTube followers.

“I’m sorry but you did fail as a mum. You wouldn’t have given up your own child,” said one of her followers.

Read more: Landlords plan “mother of all parties” as Boris hints pubs could reopen next month

Another said: “Myka Stauffer crowdfunded an adoption of two year old with autism from China, exploited him and his meltdowns for praise on YouTube, and then rehomed him like an unwanted pet once she had another biological kid.”

Myka has a daughter from a previous relationship, as well as another girl and two sons with James.

Another wrote: “Myka Stauffer really just gave her kid away because adoption wasn’t a dreamy aesthetic journey like she thought it’d be. That poor sweet little boy.”

A third tweeted: “It takes a special kind of evil to PURPOSELY search out a child, adopt them and then rehome him like a dog when he didn’t conform to your aesthetically pleasing, white-washed life.”

Another added: “The situation with Myka Stauffer is so upsetting. When you adopt a child you act as though you literally gave birth to that child and they’re fully yours. They aren’t a dog you adopted from the pound that you get to return in 14 days if they aren’t a good fit… Gross.”