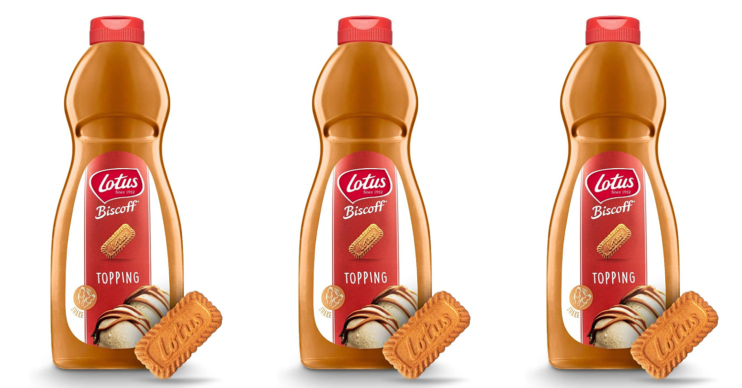 It's going straight in our basket!

Listen up Biscoff fans, as we have some pretty tasty news to share.

You can now buy bottles of Biscoff Topping Sauce in the UK.

The sauce is a little runnier than your usual Biscoff that you buy in jars in either crunchy or smooth.

Instead, this little beauty is made to be poured over ice cream, waffles or whatever sweet treat tickles your fancy.

Until now, Brits have been forced to melt their Biscoff in a microwave if they wanted to use it to top desserts.

But all that is about to change.

The huge 1kg squeezy bottles of the sauce are on sale on Amazon.

And it’ll set you back less than a tenner, too.

“The caramelised flavour of Lotus Biscoff adds a delicious sweet depth to hundreds of recipes,” said the blurb.

One Biscoff fan revealed she’d bought it for her “Biscoff-obsessed” boyfriend.

She said: “It’s good stuff – rich and smooth, with that characteristic Biscoff spice. Put in on ice cream, brownies, crumbles, or directly into your face.”

Another added: “Family favourite. It’s been used over icing on cakes, on top of ice cream, as a pancake topping. I’ve also caught my daughter putting it on her Weetabix! Tastes just like the biscuits and lasts for ages. Buy it, you won’t regret it!”

“Literally tastes like the biscuit,” said another. “And the price is perfect for the amount! Amazing on ice cream.”

It’s been used over icing on cakes, on top of ice cream, as a pancake topping. I’ve also caught my daughter putting it on her Weetabix!

Another said she was thrilled to discover the sauce being sold online during lockdown.

“Since lockdown began I’ve not been able to buy the spread anywhere and I’ve been craving it so badly. When I saw this I thought I’d take a chance,” she said.

She added: “The flavour is spot on and makes a wonderful sweet treat, whether it’s on a spoon, on ice cream or drizzled over pancakes. It’s a kilo bottle so actually it’s not expensive because it’s a huge quantity and will last you ages.”

We’re sold, are you?

Meanwhile, Askeys has added to its Treat range of ice cream sauces.

A whole range of flavours have been spotted on the shelves of Morrisons.

Limited Edition @askeysuk sauces now at @morrisons use to love the raspberry one on ice cream so! So we are interested to see what the limited edition ones taste like! 😋😊 #dessert #chocolatesauce #raspberry #new #newfood #newproducts #newproduct #foodfind #foodhunt #likesforlike #following #icecream #foodspotting #blog #blogger

Head to our Facebook page @EntertainmentDailyFix and tell us what you’ll be sampling.