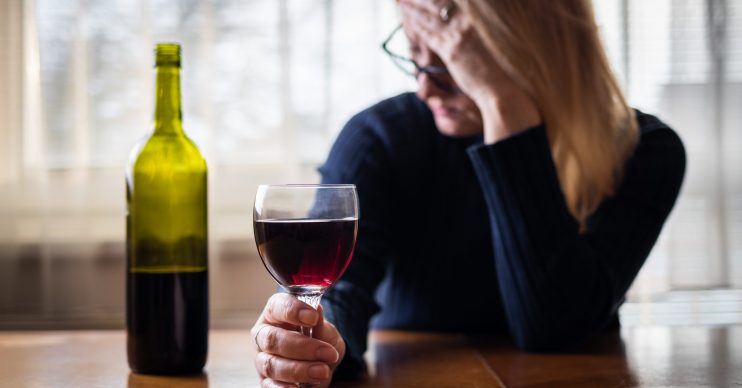 The woman was slammed by Mumsnet users…

Sometimes nothing hits the spot after a long hard day at the office than a large glass of red wine.

Running around after the kids could also cause some to hit the bottle.

However, what could be seen an innocent glass of wine to wind down has led to one woman being branded a “functioning alcoholic” by online community Mumsnet.

The woman posted: “I love a glass of wine most nights, normally one or two but more at weekends, is this okay or a bad sign?!”

She added that she tries to have one or two wine-free nights but added: “I associate it with wind down and relaxation as have a busy life.”

The woman revealed she has teenage kids, a “very busy work life” and a poorly husband.

Read more: Aldi is selling a chocolate sloth for Easter and it’s bigger and costs less than the M&S equivalent

“Is it unreasonable to want to drink wine every eve? I’m the glue that holds us all together,” she said.

The replies – and judgement – came thick and fast.

“You are a functioning alcoholic, many people have stressful lives but you need help to cope in a less destructive way,” said one user.

“I think alcohol every day or most days is excessive!!” exclaimed another.

“Yes, that’s too much if you value your health,” added a third.

“If you’re going over your recommended units it’s not healthy,” another offered.

“Honestly no, I don’t think it’s normal to drink wine every night. I like a drink but I limit it to Friday and Saturday nights,” said another.

Read more: Shoppers divided as experts finally reveal if you should keep your ketchup in the fridge or cupboard

She added: “It’s the associating with relaxing that’s an issue. Is there anything else you can use in place of wine as a way to relax – a long soak in the bath for instance?”

According to the NHS website, women are advised to drink no more than 14 units of alcohol a week – this is equivalent to 10 small glasses of wine.

“I think the advice is to have three consecutive alcohol-free nights a week,” said one sympathetic Mumsnet user. “I do this (most weeks). I love wine, and probably drink too much of it.”

“I used to drink most nights – before I developed a serious health problem,” warned another.

“At first I was gutted to quit. But within a couple of months I knew that quitting drinking was a good move. I used alcohol to relax, when feeling worried etc, and it just made it all worse, not better,” she added.

You are a functioning alcoholic, many people have stressful lives but you need help to cope in a less destructive way.

“I think if it’s one or two that’s okay, but how many more is on a weekend? If that’s one bottle a weekend night or more than yes it’s unreasonable and you need to cut down or quit,” she concluded.

However, some were on the side of the wine-loving busy mum.

“Sometimes I have two bottles a night. I’m still alive,” quipped one.

Others suggested the woman was drinking the wine out of habit and suggested healthier options, such as exercise, that she could do to unwind.

“I’m happy to admit I may be in a habit and I want to break it,” she said.

“I love to walk so will try and do more of that in the evenings Monday to Thursday, it’s all too tempting otherwise to slump on the sofa with a glass of wine,” she concluded.