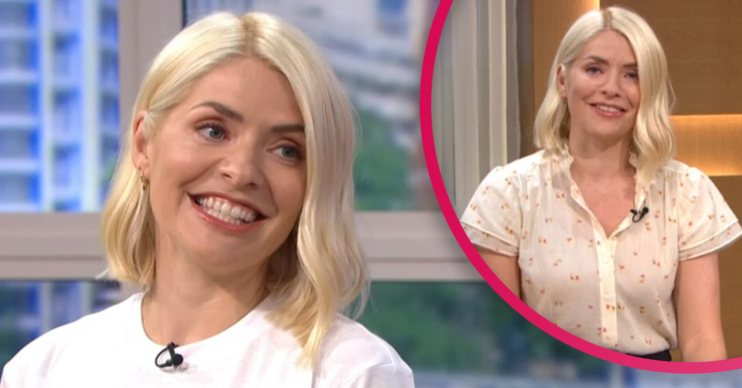 She clearly thinks it's coming home!

Ahead of the show Holly uploaded her usual #HWstyle shot to Instagram.

She revealed what she was intending on wearing on the show, but when she appeared on screen, the star had changed her top.

And it was all in honour of tonight’s England Euro 2020 game!

Posting to Instagram, Holly revealed she was wearing a Whistles shirt and Zara culottes.

She said: “Morning Wednesday… see you on @thismorningat 10am #hwstyle💁🏼‍♀️✨ trousers by @zara shirt by @thisiswhistles.”

Both are currently in the sale online.

The Whistles Forget Me Not Voile Blouse was £79 but you can now snap it up for £49.

It’s available online in sizes 4-18 and, when we checked, there were lots of sizes left.

The same can’t be said for the trousers, sadly.

They’re pretty much sold out in all sizes, however, the website does show a pretty similar-looking pair that are due to go on sale soon.

What did viewers say about Holly’s outfit today?

Many declared that it was a better look than yesterday’s dress, which some said resembled a “tablecloth”.

“That’s more like it Holly, you look gorgeous,” said one fan.

“That’s much better than yesterday – this is more you,” declared another.

“I absolutely love this outfit, you look stunning,” said a third.

“I think that this outfit is lovely – love the shirt and the trousers. A lovely look,” said another.

However, proving that you can’t please all of the people all of the time, some Holly fans didn’t like the look.

In fact, one called it “boring”.

“You look lovely as always but a slightly boring outfit choice today,” they said.

Why did Holly change her top?

However, when viewers tuned into the show at 10am, they discovered that Holly wasn’t actually wearing the outfit she posted online.

Instead, she’d whipped off her blouse and put on an England T-shirt in honour of tonight’s Euro 2020 semi final.

“On my TV, it shows you are wearing something else though… England T-shirt,” said one confused This Morning viewer.

“Whether it’s coming home or not @hollywills wearing an England shirt is pretty damn beautiful!!!” said another fan on Twitter.

However, some found fault with the fact Holly wasn’t wearing an official England shirt.

“Could Holly not afford a real England top?” posted one.

“Real or not, I’m not going to deny Holly suits that England top,” said another.

However, fashion blog Fashion You Really Want informs us that Holly was wearing an official FA T-shirt.

The mens FA England Crest T-shirt is on the House of Fraser website and costs £12.99.

Head to our Facebook page @EntertainmentDailyFix and tell us which of Holly’s outfits you preferred.

Does Alex Scott have a partner? What happened with her Coronation Street ex?