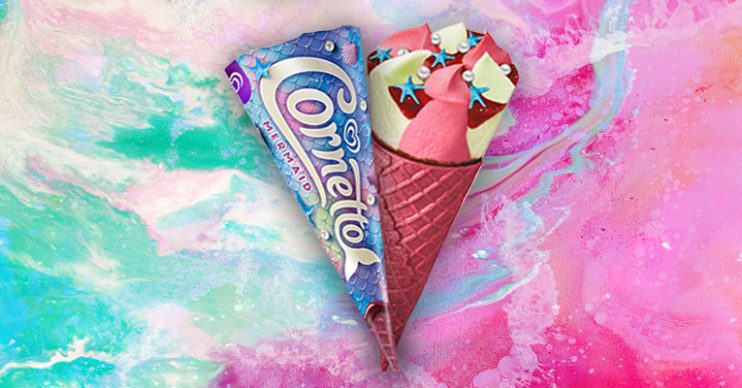 Ice cream fans are going to be in heaven when they hear about a new launch from Wall’s.

It appears mermaids do exist… in Cornetto form at least!

Tapping into the trend for all things magical and mermaidy, Wall’s has launched the amazing new Mermaid Cornetto.

The cones are filled with delicious matcha green tea and raspberry-flavoured ice cream.

According to the blurb, the Mermaid Cornetto contains “raspberry fruit ice and matcha green tea ice cream in a wafer cone with chocolate-flavour coating, raspberry sauce and biscuit and cereal pieces covered in white chocolate”.

Read more: Hungry Horse pubs are selling a lasagne stuffed inside of two pizzas and it looks delicious

What’s more, Wall’s has swapped the traditional Cornetto cone for a pink one!

The wrapper is pretty special too, as the ice cream comes in a holographic pink and blue wrapper that looks like it’s been made of mermaid scales.

In fact, keen ice cream fans may have had a Wall’s UniCornetto, as they launched overseas last year.

The new Mermaid Cornettos will be on sale in Tesco from March 2, with Sainsbury’s following suit on March 16.

Single cones will have an RRP of £1.20 each, while you’ll also be able to get your hands on packs of four for £3 – which makes them just 75p each.

Excuse us while we go and make some room in the freezer!

Some eagle-eyed shoppers have spotted the ice creams on sale already though – pop along to your local Wilko and you’ll find them there for £1.50.

Yes we know it’s more than the RRP, but it appears the store has something of an exclusive.

“Omgoodness!! Mermaid Cornetto. What!!??” said one fan on Instagram.

“OMG I need one!” exclaimed another fan.

“OMG yes to the flavours – matcha! Glad it’s not just a coloured design,” another commented.

Calippo Lime came out of its multipack to be sold individually, while the brand also launched a new Calippo Cola flavour.