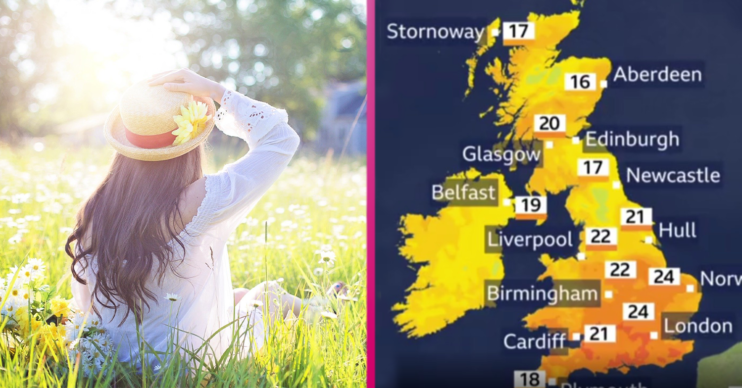 UK weather: Brits will enjoy highs of 26C as an eight-day heatwave kicks off this weekend

But there is some bad news…

Brits are reportedly in for a scorcher this weekend as the weather takes a turn for the better.

And the high temperatures will kick off an eight-day heatwave.

It’s set to be as warm as Spain, which will surely come as some comfort to Brits desperate for a sunshine holiday overseas.

The government‘s lockdown restrictions and social distancing should still be adhered to, even with the sun shining.

But first, the bad news

However, with good news naturally come a little bit of bad.

And we’ll have to contend with more rain first – and thunderstorms too, potentially.

According to the Met Office, the next couple of days remain unsettled.

You’ll have no doubt experienced showers today (June 11) if you live in England and Wales.

Northern Ireland and Scotland have escaped the worst of it though, staying largely dry.

Rain is set to clear tonight, with showers expected across “many areas of the UK”.

Friday and Saturday will also be unsettled.

Temperatures mainly around average for the time of year but with some very warm spells likely.

Heavy, possibly thundery rain is forecast for most, while the accompanying wind will make it feel chilly.

Now for the good news

Online forecaster Netweather predicts it’ll “remain warm and humid through the weekend, as we import very warm and moist air from the near continent”.

It added that temperatures will reach 17-20˚C across Scotland, Northern Ireland and northeast England.

Today was rather #cool for early #June, but it will gradually be #warming up over the next few days as we import some #warm and #humid air from continental Europe. This warmer air will lead to scattered heavy and #thundery showers for some. pic.twitter.com/jzTY9IbmoN

And the warm weather is expected to last for more than a week, says The Sun, sparking a mini heatwave.

According to the BBC: “There are signs that it will warm up by the weekend with temperatures perhaps lifting above normal in some areas.”

The Met Office conformed: “From the middle of June, there should be a return to more settled conditions with longer drier and brighter spells.”

And, looking ahead to late June/early July, things are most definitely back on track.

The forecaster revealed: “Temperatures mainly around average for the time of year but with some very warm spells likely.”

Head to our Facebook page @EntertainmentDailyFix and tell us how you’ll enjoy the heatwave.