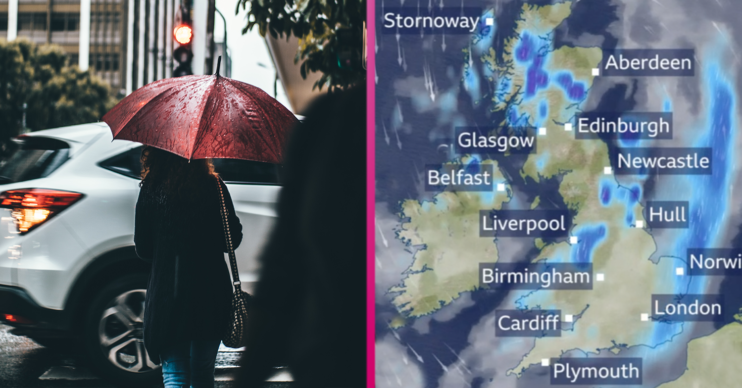 UK weather: Heavy rain predicted for Brits before highs of 25C next week

It's time to dig out those brollies!

Britain is set to bask in highs of 25˚C next week, but there’s plenty of heavy rain to endure before temperatures start to rise.

Over the weekend, many parts of Britain were lashed with storms, in stark contrast to the heatwaves we’ve seen so far this summer.

But with overseas holidays in doubt, the long-range forecast should make staying on home turf for the time being that little but more enjoyable.

That means that, by the end of the week, Brits will see plenty of humid air that’ll leave the country feeling “very warm indeed”.

Where we get sunny spells between the downpours, actually I think it’s going to feel very warm indeed.

Bright sunshine are expected in between downpours, he said.

However, those showers could well be biblical.

Low pressure later in the week in the south east is set to bring “showers and longer spells of rain”.

High winds and temperatures struggling to get into double figures are also predicted.

The Met Office also predicted it’ll be “mainly cloudy and rather cool, with most places seeing spells of rain, possibly heavy and persistent, and thundery in places”.

However, it isn’t time to dig out the jumpers again just yet.

By Friday (June 12), temperatures are forecast to rise.

As the jet stream moves across the UK, the weather will turn more unsettled this week pic.twitter.com/iHZjw1QZoL

“It’s not going to be raining all the time,” Rich said. “Where we get sunny spells between the downpours, actually I think it’s going to feel very warm indeed.”

In fact, next week could see a string of highs in the mid-20s again, with 25˚C predicted for London next Monday.

The Met Office revealed: “Over the weekend, northern areas of the UK should see the driest and brightest weather, particularly western Scotland.”

It added: “Elsewhere, conditions will be rather changeable and breezy for many with some sunshine but also areas of rain or showers. Many parts will become warm, perhaps very warm, particularly northwestern areas.”

After warning of high winds, cloud and rain, the forecast concluded: “Temperatures will probably continue to be above average generally.”

However, with another bout of sunshine comes fears of a hosepipe ban.

The Met Office recently confirmed the UK had its sunniest spring since records began in 1929.

As a result of the warmer weather in Ireland, a hosepipe ban will come into affect there from tomorrow (June 9).

And it’s feared the UK could be about to follow suit.