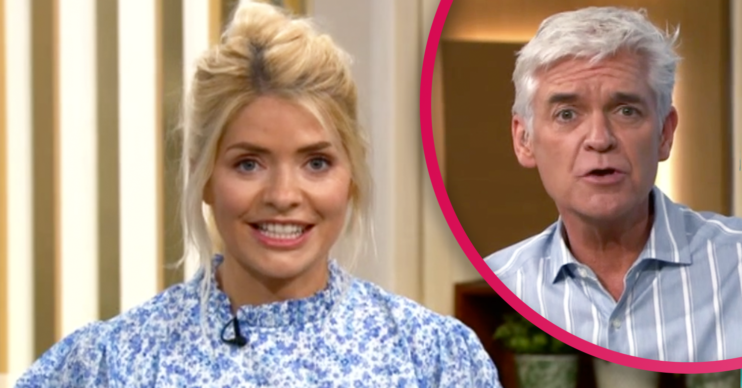 And it's not the first time, either!

It appears This Morning‘s Phillip Schofield has been taking styling tips from co-host Holly Willoughby.

Yes, it appears the pair are so close, they’ve even started dressing alike!

As the duo kicked off Tuesday’s show (June 16), one eagle-eyed viewer made the observation.

Ahead of the show, Holly uploaded her daily #HWstyle shot.

In the picture, she revealed she was wearing a £129 dress by Ghost that’s now sold out.

And that’s when an eagle-eyed viewer spotted something fishy could be going on behind the scenes.

Has silver fox Phil sacked the stylist and instead recruited Holly?

And it appears copycat Phil decided to coordinate his look with his blonde co-host.

One Holly fan asked: “Do you and Phil coordinate your clothing colours daily? Both in pale blue today.”

Phil hasn’t revealed where his shirt is from, but the grey/blue striped shirt matched Holly’s look perfectly.

And it’s not the first time the pair have twinned their looks.

Do you and Phil coordinate your clothing colours daily? Both in pale blue today.

Others weren’t so kind to gorgeous Holly and branded the dress “granny”.

“Looking gorgeous as ever Holly, but please stop wearing the granny dresses,” pleaded another.

“You’re not old enough for this look but hair and make-up on point,” another critic offered.

Over on Twitter, Holly’s fans suggested she was paying tribute to a retro TV show with her look.

With the ruched sleeves and high neck, some said Holly looked like an extra from 1970s Little House On The Prairie.

Morning Tuesday… lots to talk about today, see you at 10am on @thismorning Dress by @ghostfashion 💙

“Holly dressed like she has an audition for Little House On The Prairie later #ThisMorning,” one posted with the crying with laughter emoji.

Another tweeted a picture of Nancy Oleson, one of the characters on the show.

And they commented on Holly’s “homage” to her.

“Holly paying homage to Little House On The Prairie today,” they said.

Earlier this week, Holly was branded a “tease” as she presented the show in a sheer blouse.