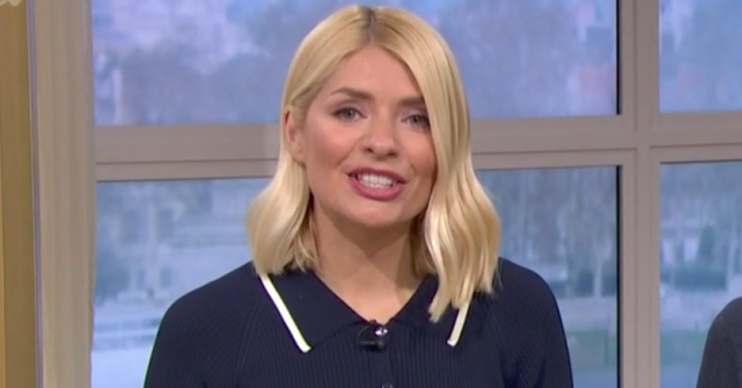 Someone even posted the vomit emoji!

Poor old Holly Willoughby isn’t doing too well in the style stakes this week in the eyes of This Morning viewers.

After her Ghost dress – with its floppy white collar – was deemed something somebody’s gran would wear, her outfit on Thursday’s show has also been slammed online.

Posting her #HWstyle look to Intsagram ahead of the show, Holly revealed she was wearing a knitted navy and cream dress by Iris & Irk at The Outnet.

The ribbed dress, which costs £145 and is available in sizes extra small to large, has a navy body and contrasting cream cuffs, piping on the collar and frilly hem.

And, while a few of her followers liked it, others urged the star to “sack the stylist”.

Read more: The Duchess of Cambridge shows off her sporty side in M&S trainers

“Nope, don’t like it.. doesn’t suit you,” said one rather blunt follower, adding the vomit emoji.

Have you mugged an old lady for that dress? Fashion police!

“Really sorry but that’s a granny dress, they’re making you old before your time,” said one, who added that Holly was “beautiful all the same”.

“Sack the stylist Holly – it’s daytime TV, not a nunnery,” advised another.

“Nope, don’t like this – it’s not sure if it’s a T-shirt or a girlie dress. Even though you’re working it, it’s not good,” said another.

Others said the dress seemed more suited to actual royalty than the TV kind.

“Holly looks lovely as always, but I think that dress is more Kate Middleton than Holly,” offered one follower.

Read more: The Duchess of Cambridge dazzles on date night at the theatre

“Have you mugged an old lady for that dress? Fashion police!” slammed another.

She showed off a bit of leg in a Reformation brown polka-dot minidress, which had a ruffled hem and sleeves.

While a third said: “Love that dress!”

“You look fab,” concluded another.

While the exact match isn’t on the website, there are a couple of similar ones in different prints – and they cost £235 if you fancy splashing the cash!

Head to out Facebook page @EntertainmentDailyFix and let us know what you think of Holly’s looks.