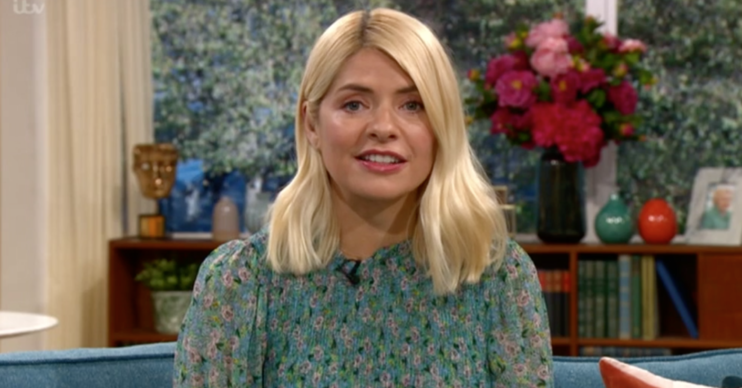 Some even posted the sick emoji

Some people really didn’t like the dress Holly Willoughby wore on This Morning earlier today.

The star was bombarded with comments about her green floral dress as she uploaded her daily #HWstyle post to Instagram.

She revealed she was wearing a £135 pleated Ghost midi dress.

And to say some didn’t like it is an understatement.

Morning Tuesday… Stay with us and stay safe… 🌸. Dress by @ghostfashion 🍬

They added: “What are you wearing????? Jesus Christ save her!”

“So quaint,” another posted.

Another said that, while they liked the design and fabric of the dress, the print reminded them of something…

“I love the design and fabric of your dress,” they started, “but the print of your dress looks exactly my grandmother’s drapes in the informal kitchen, where the family maids have breakfast.”

Attempting to soften the post, they added: “Your personality still pulled it off beautifully, however.”

Others called for the star to wear more items they could afford, too.

“Lovely clothes but could you wear some high street fashion?” they said.

They added: “So many more of us can try your gorgeous looks that way.”

“Stop with the Ghost @hollywilloughby,” another pleaded. “I can’t afford it.”

The print of your dress looks exactly my grandmother’s drapes in the informal kitchen, where the family maids have breakfast.

“Gorgeous dress but far too expensive!!” another agreed.

Others likened the dress to those optical illusion pictures where you looked for the hidden image behind the print.

“Eeeee Holly, that dress is lovely, but it’s like one of those pictures you used to get from Athena where you have to look for the number. I’ll be looking all morning now hahaha!” they said.

However, for every negative comment there were hundreds of lovely ones complimenting Holly’s look.

“It would be lovely for a special occasion,” said one fan defending the price.

“Such beautiful colours, really suits you,” another fan of the look said.

“Looking beautiful as ever,” said another of the This Morning host.

Head to our Facebook page @EntertainmentDailyFix and tell us what you thought of Holly’s look.