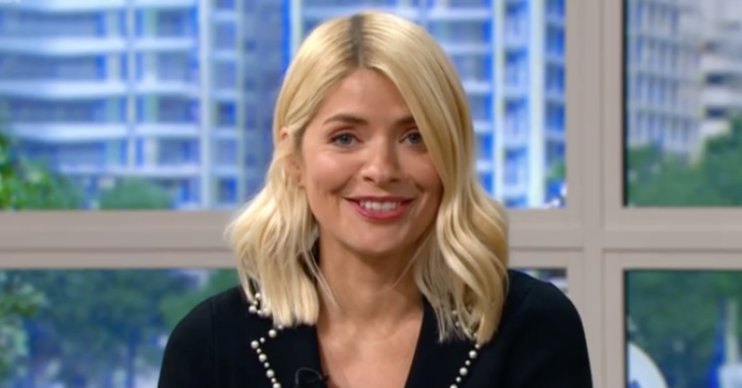 TV’s Phillip Schofield left This Morning viewers in shock today (April 28) as he made a crude joke about the dress his co-host Holly Willoughby was wearing.

Ahead of the show, Holly posted her daily #HWstyle picture to Instagram.

She revealed that she was wearing a £260 Sandro Paris black dress with a faux pearl beading on the lapels.

Morning… all ok? Stay home and stay with us… see you at 10am on @thismorning Dress by @sandroparis ✨

However, while her followers lapped up the chic style, Phil lowered the tone as the show went live.

“Your necklace has broken by the way,” he quipped with a cheeky smile.

“Got my pearls on today,” a grinning Holly replied, stroking the pearl embellishment.

“So it’s been on 11 minutes and we’ve had Holly Willoughby talking about a pearl necklace and a woman rubbing a squirrels head that looks like something else,” one outraged viewer said.

@thismorning bit early for @hollywills talking about her pearl necklace.

“A broken pearl necklace, as pointed out by @Schofe. This is pure daytime smut,” said another.

Others found the host’s cheeky quip funny, though.

“Loving Holly’s pearl necklace,” said one with a wink.

“@thismorning bit early for @hollywills talking about her pearl necklace,” said another, adding a series of crying with laughter emojis.

Jokes aside, over on Instagram, Holly’s followers were loving her look.

One said: “I adore the dress. You look stunning as per usual.”

Another added: “Pearls all day every day!”

“OMG love that frock!” exclaimed another.

“Love the dress, beautiful,” said another.

“Great dress, mind you, you could wear a bag for life and rock it,” another quipped.

“You guys are hilarious”

Others commented on the chemistry between Holly and Phil.

“I love watching you and @schofe you guys are hilarious!!! Thanks for such great entertainment,” said one fan.

As the show progressed, the saucy pair indulged in even more risqué banter during a cooking segment with John Torode.

It happened as John told the pair how to recreate a McDonald’s Egg McMuffin.

“So I’m buttering my muffin,” a cheeky Holly giggled.

“Is it nice buttering your muffin there, Holly?” John asked.

One viewer branded John a “perv” for the comment and said there was “no need on morning TV”.

However, others found it funny.

“Watching you today and seeing Holly’s pearl necklace, a squirrel getting its head rubbed off and John nearly setting his kitchen on fire is literally the funniest show I have ever seen!” one happy This Morning viewer tweeted.