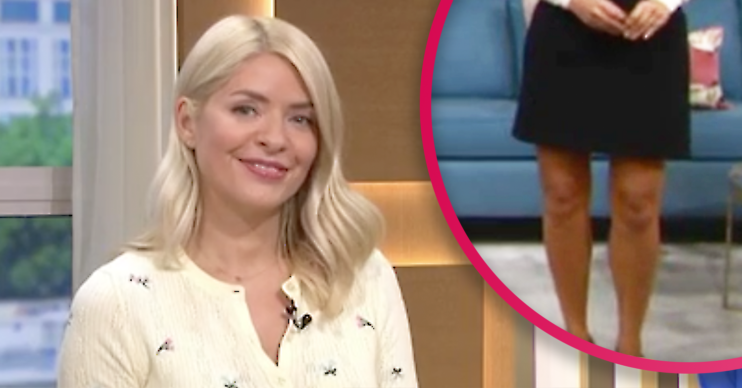 Did you spot them too?!

And, alongside a host of compliments, came a few bizarre comments from her fans.

It all started when she star uploaded her daily #HWstyle picture before heading in front of the This Morning cameras.

Read more: Lorraine star Ross King wanted to ‘lick the Queen’s face’ when she gave him his MBE

The presenter wore a £55 belted mini skirt by And Other Stories teamed with an embroiled cardigan, £25.99, by Zara.

However, while some agreed that she just gets better with age, others were more concerned with Holly’s knees.

In particular, the “faces” they claimed to have spotted in them.

“Faces in your knees,” said one of Holly’s followers.

“I see that too,” another replied.

Others commented on the post with the crying with laughter emojis.

Another said they had seen “teddy bears”.

Boy in my work said Holly Willoughby’s knees look like a couple a camels and I canny stop laughing 😂 pic.twitter.com/HfBy6cG0Ba

Another posted on Twitter: “Boy in my work said Holly Willoughby’s knees look like a couple a camels and I canny stop laughing.”

It’s not the first time This Morning viewers have seen faces, or indeed creatures, in Holly’s knees.

Back in June, ED! revealed how a man called Dave took to Twitter to declare he could see a “sloth’s face” in the presenter’s knees.

He even posted a close-up shot of Holly’s legs to illustrate his point.

Tagging the ITV show, he posted: “Is it just me or can you see a sloth’s face in Holly’s knees?”

@thismorning is it just me or can you see a sloths face in Holly’s knees pic.twitter.com/oFt5Vvu8Az

However, while some said Holly looked sizzling “hot” with her legs out, others urged her to cover up.

Others commented on the fact that Holly was wearing a jumper with Britain in the grip of a September heatwave.

“Lovely outfit, but you’ll be a bit warm in that!” quipped one.

Head to our Facebook page @EntertainmentDailyFix and tell us what you can see in Holly’s knees!