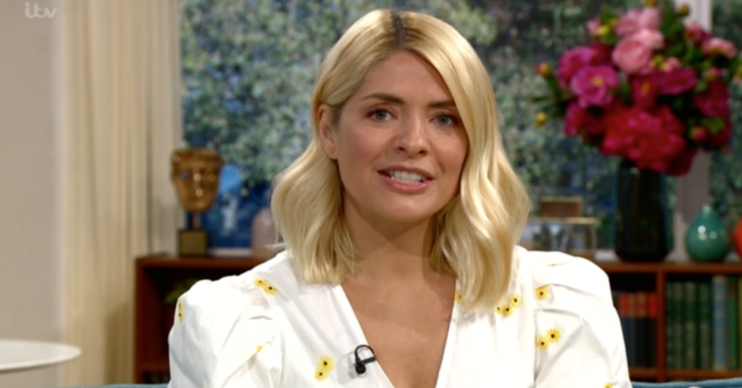 They also wonder if she's off to be a Zoom bridesmaid

As she appeared on screen at 10am, Twitter was flooded with comments about her Ghost dress.

Morning Monday… a new week brings new feelings and emotions… Hope you are ok? Please continue to stay at home with us… see you at 10am on @thismorning #keepgoing Dress by @ghostfashion 💛

The Ghost website states the sleeves “really bring this classic wrap style to life”, but Holly’s critics aren’t so sure.

“Holly come as a meringue today I see #ThisMorning,” said one viewer.

Others asked if she was auditioning for a part in ’80s soap Dallas, where shoulder pads were king.

“Is Holly after a part in Dallas?” one asked.

Holly come as a meringue today I see #ThisMorning

“Holly looking very Dynasty today, Joan Collins should be proud of those shoulders,” said another.

“No, she’s Sandra D – she’s been watching Grease,” another quipped.

Not her “best look”

Others said it wasn’t the star’s “best look”.

“Cor blimey, Holly looks like she is wearing a bed quilt concoction. What’s with the puffball arms?” another asked.

“Holly’s dress is a bit wild,” said another.

Another likened Holly’s look to Skips – an immortal yeti from The Regular Show.

#ThisMorning #hollywills I love you Holly, you always look flawless, fresh and pretty. But todays dress reminds me of Skips from the regular show. Sorry doll 🤭 pic.twitter.com/ZDTZeQ0rWe

Others asked if Holly had bridesmaid duties to carry out after the show goes off air at 12.30pm.

“Is Holly dashing off to be a Zoom bridesmaid after the show then? That dress is really pouffy and voluminous!” they said.

Over on Instagram, others liked the look, although the puff sleeves couldn’t really been seen given the angle of Holly’s selfie.

Holly come as a meringue today I see #ThisMorning.

“That dress is stunning,” said another.

“Love this dress. It’s so fresh and looks lovely on you,” another told the star.

Over the weekend, Holly shared a couple of fresh-faced selfies of herself enjoying her time at home.

In the first, she posted a photo with two boxes of co-host Phillip Schofield‘s wine.

In the second, Holly was seen in the garden planting potatoes.

“Lovely with no make-up,” commented one of the star’s followers.

Head to our Facebook page @EntertainmentDailyFix and let us know what you think of Holly’s look.