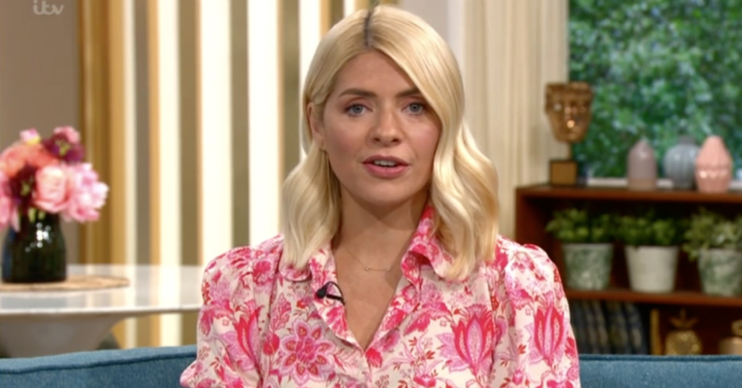 The £200 skirt was ruined during the cooking segment…

While there’s no doubt that she looks gorgeous, This Morning viewers have revealed they were “horrified” at the cost of the outfit Holly Willoughby wore on today’s show (May 14).

In fact, the floral two-piece was so expensive, viewers said they “only wish” they could afford to copy the presenter’s style.

Uploading her usual #HWstyle photograph to Instagram, Holly revealed she was wearing a pretty pink co-ord by Tabitha Webb.

“Can you please wear some more affordable outfits on occasion?” they added.

Read more: Holidays could be banned till 2023

The woman then claimed that Holly gets “paid to wear these designers”.

She continued: “But it would be nice for once to admire an outfit that’s been bought from Next, Marks And Spencer, Monsoon or Fat Face even.”

Went to go and see if I could afford the outfit. Blouse alone is £295.

The woman went on to point out that This Morning features “reasonably priced things when the show covers fashion”.

However, she added: “I was horrified that today’s outfit is just under £500 to buy.”

Morning Thursday…. sending you all lots of love today… stay safe and stay with us… see you on @thismorning at 10am. ❤️. Shirt and skirt by @tabithawebbuk 🌸🌺🌸🌺

The woman added: “May have to give that outfit a miss as having our baby in three weeks.”

Another said of the pricey ensemble: “Love love the dress, Holly – beautiful. But I can only wish.”

Read more: Brits to bask in sunshine as Met Office reveals a heatwave is on the way

“Love this beautiful print, looks gorgeous on you Holly,” said another. “But unfortunately a bit expensive for most of us.”

Later in the show, it appeared Holly had ruined the outfit, as a piece of chicken jumped out of the wok during the show’s cooking segment.

It landed directly on the £200 skirt.

Holly has worn pieces from the high street on many occasions previously.

Earlier this week she wore a dress from Oasis that was in the sale for £32 on very.co.uk.

Holly is also a fan of Zara, Warehouse and Office.

Plus she is a brand ambassador for M&S and often uploads pieces from the latest collection to her Instagram.

The star’s social media followers have also complained about the angle Holly is taking her selfies from.

They’ve commented on her posts encouraging her to switch it up a bit and try a different pose.