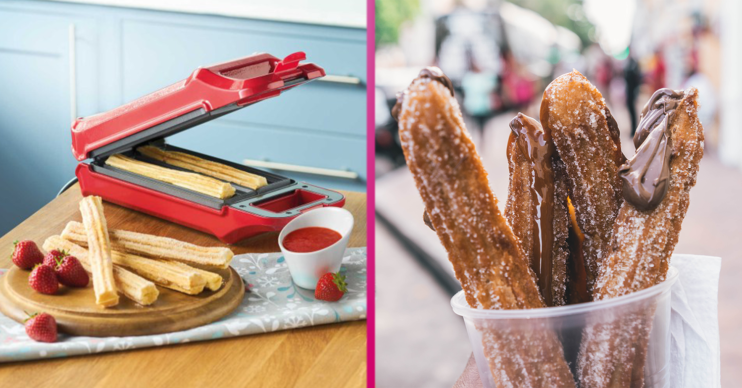 You'll have to be quick if you want to nab one, though…

Fans of the Spanish doughnut-style churros are in for a treat thanks to Aldi.

Last year, the supermarket released a bargain kitchen gadget that helped you to make your own.

It sold out pretty much straight away – and now it’s back.

Part of this week’s Aldi Specialbuy range, the machine quickly sold out online.

However, be sure to put it on your list if you’re heading into store to do your essential food shopping.

Read more: An eight-day heatwave is on the way for Brits

It costs less than £15 and comes in an array of colours.

You can pick from red, white or black so it’ll pretty much match any kitchen colour scheme.

Made by Ambiano, it’s said to be a healthier way to make churros as you bake them rather than fry them.

It features enough space to make four churros at once, has an automatic temperature control and features non-stick plates – a godsend when it comes to clearing up!

The kit also includes a piping bag to ensure you get that distinctive shape.

Plus there’s an indicator light that’ll let you know when they’re perfectly crisp, golden and ready to eat.

Dad’s just gone into Aldi to buy a churro maker. An absolute legend if I do say so myself.

All that’s left is to toss them in some sugar and cinnamon – and dip in to a pot of melted chocolate.

Aldi said: “Create this family favourite treat without the hassle of frying, with this Churro Maker.”

The blurb added: “Featuring space for four churros at a time, automatic temperature control and non-stick plates, these amazing treats are ready in only minutes and cooking them has never been easier.”

You’ll have to be quick if you want one, though, as they’re already proving popular.

The churro maker has now sold out on pre order online, this will be available to purchase in store from 11/06/2020. Thanks – Kaileigh

Posting on Twitter, one churros fan said: “Dad’s just gone into Aldi to buy a churro maker. An absolute legend if I do say so myself.”

Another added: “My boyfriend went to Aldi and came home with a churro maker what a great time to be alive y’all.”

Head to our Facebook page @EntertainmentDailyFix and tell us if you’ll be getting one.