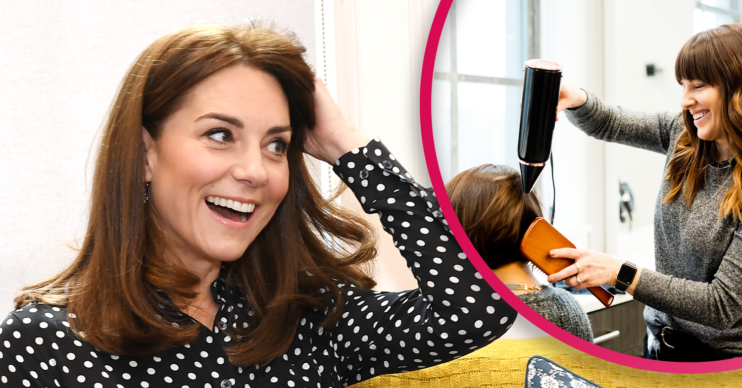 The gorgeous Duchess of Cambridge has showed off her post-lockdown hair transformation.

Just over a week after salons were given the green light to reopen, Kate decided to give her chestnut brown locks a little makeover.

And the results, naturally, are as stunning as the woman herself.

During her most recent Zoom call and on a trip to the Queen Elizabeth Hospital, Kate wore her dark hair back in a ponytail.

Posting a series of photos to Instagram ahead of her appearance on BBC Breakfast, it appears Kate has had her highlights done.

Wowww, she looks so beautiful. I am in love with her hair.

Kate also appeared to have had her layers cut back in, with her hair styled in Farrah Fawcett-esque flicks for the appearance.

“She looks so beautiful,” said one royal fan.

“Kate is #hairgoals!! So lovely,” said another.

“Our duchess is glowing – simply radiant,” another confirmed.

“Her hair! WOW!” exclaimed another of Kate’s honey-coloured highlights.

“Right!? She looks phenomenal!!” another agreed.

“Wowww, she looks so beautiful. I am in love with her hair,” said another.

“Someone’s had their hair done!!” said another.

Others commented on Kate’s outfit.

For the launch, Kate wore a navy and white spotted dress by Emilia Wickstead.

“What a great outfit on her – she looks great in classic styles,” said one fan of her look.

“Another spot on fashion choice from the duchess. Polka dots are timeless,” said another.

Others commented that Kate would’ve made a great pre-school teacher after the BBC Breakfast segment.

It saw her chatting to parents and their young children.

Some even called her the “children’s princess”, in a nod to her late mother-in-law, Diana, Princess of Wales.

She was dubbed the “people’s princess”,

Posting a series of pictures and a video to Instagram, the Kensington Palace account explained Kate’s new project.

It said: “Tiny Happy People is a BBC Education initiative providing a range of free digital resources, specifically designed to support parents and carers in developing children’s language from pregnancy to the age of four.”

Head to our Facebook page @EntertainmentDailyFix and let us know what you think of Kate’s new look.