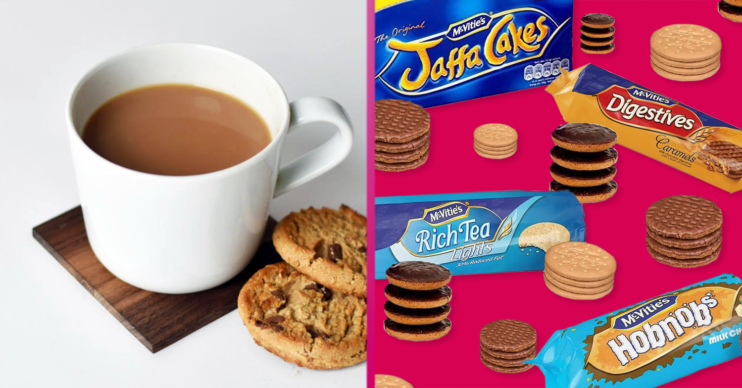 McVitie's has also revealed how many dunks different biscuits can handle

Hot on the heels of last week’s International Tea Day comes new research into the perfect biscuit to dunk into your cuppa.

After all, we’ve all come a cropper after going in for that second or third dunk only to find your biscuit disappears with a splash into your mug.

There’s surely no one better to conduct the research than one of the nation’s biggest biscuit makers, and McVitie’s has spent hours looking into the best biscuits to dunk into your tea.

It’s also revealed just how many dunks each biscuit type can withstand.

While it isn’t exactly the world’s most exciting biscuit in terms of flavour, it appears the humble Rich Tea is a pretty perfect dunk-able biscuit.

It’s one of the three labelled “easy dunkers”, with Dr Farrimond calling it “the most robust of all dunkers in prolonged dunk tests”.

It’ll withstand between two and eight dunks before becoming too soggy to fish back out.

The McVitie’s Granola Oat Bake is also in the top three, withstanding between four and eight dunks.

And the winner is…

However, top of the dunking pops is a Caramel Digestive.

“An ideal starter biscuit for novice dunkers, this is a remarkably versatile and flavourful three-layered dunker – the chocolate and caramel layer acting as a glue that holds the biscuit intact after repeated plunges,” Dr Farrimond said.

Chocolate-coated biscuits tend to hold together longer, the research suggested.

The chocolate and caramel layer acts as a glue that holds the biscuit intact after repeated plunges.

Meanwhile, oaty ones such as Hobnobs can crumble in seconds – so dunk quickly, and at your own peril!

Don’t even go there!

Jaffa Cakes and normal Hobnobs are two biscuits classed as “difficult” to dunk.

“The most challenging of all,” said Dr Farrimond. “The Jaffa Cake is very fragile when wet. Its good absorptive capacity mean that it is a flavour-intense treat if dunked successfully, though.”

He also revealed a host of top tips on how to dunk more successfully.

Tea-loving Brits should let their cuppa cool for three minutes before dunking.

The doubles the potential dunking time before the biscuit disintegrates.

You should also hold your biscuit at a 45˚ angle to allow the heat to be distributed to avoid the “tip crumbling off on entry”.

Let us know if you’ll be trying the tips with your next cuppa on our Facebook page @EntertainmentDailyFix.