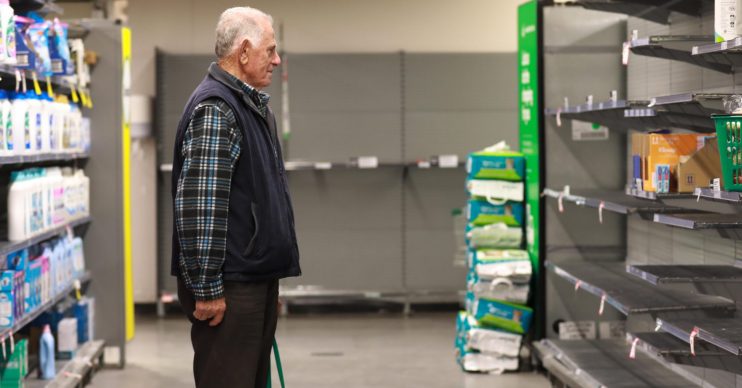 Elderly opening hours at UK supermarkets such as Tesco and Sainsbury’s kicked off in earnest today amid the coronavirus pandemic.

Supermarkets stepped in to ration goods and open stores exclusively for elderly and vulnerable people after massive stockpiling across the nation led to empty supermarket shelves.

Among the items stockpiled by Brits are toilet roll, paracetamol, pasta and tinned goods.

So if you’re over 70 and considered at risk, which supermarkets are offering elderly hour, and when should you go?

Sainsbury’s kicked off its elderly opening times today, with all stores opening exclusively to OAPs and those at risk for the first hour of trading.

This varies depending on your local store’s opening time but one shopper told ED! that they arrived at their local Sainsbury’s at 7am.

The shopper revealed they got everything they needed but some shelves were empty and they couldn’t get loo roll, while bread was limited to two loaves per person.

Tesco said it was doing “everything” it could to keep it “business as usual” during the coronavirus crisis.

It has implemented a storewide restriction which means shoppers can only buy three items from every product line in store.

When it comes to elderly opening times, Tesco will prioritise one hour – between 9am and 10am – every Monday, Wednesday and Friday for vulnerable and elderly customers.

The store said this does not apply to its Tesco Express stores.

Tesco is also encouraging those who can use Click + Collect to do so as this will free up delivery slots for those who can’t leave the house due to disabilities or self-isolation.

Posting on Instagram, it revealed: “On Friday 20th March we will be opening our stores from opening time to 9am to allow the most vulnerable, and those who support them, to shop and get what they need.”

It added: “We would like your support in not shopping before 9am on Friday 20th March.”

Asda is also limiting all customers to three units per customer to stop stockpiling.

Morrisons announced a raft of measures to ensure the elderly were well looked after during the pandemic.

As well as opening to the elderly only every day between 9am and 10am, it announced plans for an emergency expansion of its online delivery service and also said it was launching new food parcels to allow families to stock up during self-isolation.

The supermarket said it would be making more delivery slots available and launching a customer call centre for orders to be taken over the phone.

On Friday 20th March we will be opening Asda stores from opening time to 9am to allow the most vulnerable, and those who support them, to shop and get what they need.

The frozen food giant said, for the first hour of trading, it is opening all of its stores exclusively to the elderly and vulnerable.

Aldi is not opening its stores early or exclusively for the elderly and vulnerable.

An Aldi spokesperson told ED!: “We are committed to supporting elderly and vulnerable customers as best we can and are therefore encouraging our colleagues and customers to be especially considerate of others at this time.”

ED! also contacted Lidl to ask if it was planning on rolling out elderly opening hours nationwide and the answer was a resounding no.

Earlier this week, the store announced its 163 stores in Ireland would be opening exclusively to the elderly every day between 9am and 11am.

However, Lidl stores elsewhere are open as normal.