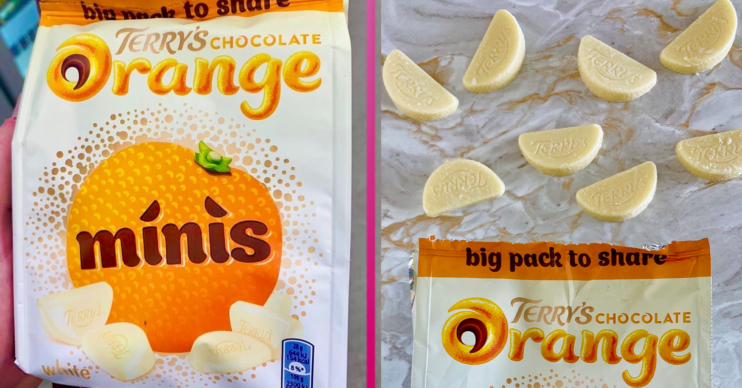 They've been described as "heaven in a bag"

The launch comes hot on the heels of Cadbury’s chocolate orange Fingers and Giant Buttons.

Earlier this week, the Orange Twirl also went on sale for the second time.

A chocolate orange Toblerone also caused a stir when it was spotted on the shelves of Tesco.

What do we know about the Terry’s White Chocolate Orange Minis?

Yes, it would seem Brits are now spoilt for choice when it comes to chocolate orange goodies.

NewFoodsUK told ED! about the find.

They spotted them on the shelves of the Co-op and told us the sharer bags cost £2.

“Omg! These have been spotted in @coopuk!” they squealed.

“Christmas is really on its way!”

Oh my god holy Jesus… that is heaven in a bag!

Very nice indeed if you listen to the account’s followers, who were quick to reveal they couldn’t wait to hunt the sweets down.

“Oh my goodness,” said one.

“I’ll be tracking them down!” said another.

“They look soooooo good!” another declared.

“So many new snacks,” another added.

“What a time to be alive!” exclaimed another.

“Can’t believe how much different chocolate is being released!” another stated.

“Oh my god holy Jesus… that is heaven in a bag!” declared another.

However, it appears the bags aren’t in all Co-op stores just yet, as one chocoholic revealed she was “devastated” after visiting her local store.

“I went to my Co-op just now and they didn’t have them!” she wailed. “I’m devastated!”

“Just a shame you can’t eat them,” quipped one on the post.

“Why?” enquired another follower.

“Because they’re Terry’s,” came the reply.

The poster was referring to the classic Terry’s Chocolate Orange ads, which featured Vicar Of Dibley star Dawn French.

In the ad, she can be seen drooling over the ball of chocolate orange deliciousness.

We’ll fight you for them, Dawn!