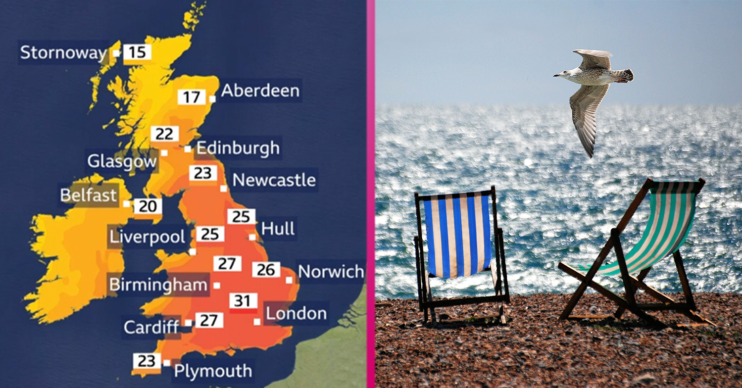 The weather appears to be playing ball with Boris Johnson‘s plans to allow Brits to enjoy a staycation.

With the PM about to ease lockdown and announce hotels, B&Bs and holidays parks can reopen, temperatures are about to soar.

Many parts of the UK are enjoying sunshine today and things are forecast to get even better as the week progresses.

A 700-mile wide “midsummer melt” is on its way and Brits will be basking in temperatures hotter than the Caribbean.

Midsummer’s Day falls on Wednesday (June 24) and with it comes highs of 32˚C.

A plume of subtropical and continental air will be responsible for bringing the sizzle.

And things are set to become even warmer on Thursday, with some enjoying highs of 34˚C, for instance!

Midsummer heat and the hottest spell of the year so far is forecast, thanks to southerly winds and air from sub-tropical latitudes.

It’s time to reach for that sunscreen, dig out the paddling pool and book a couple of days off work.

Because temperatures above 30˚C have been forecast until Friday.

And it’s not just good news for those down south – our friends in the north can also expect highs of 27˚C.

There’s some hot weather on the way, here’s a look at what we can expect pic.twitter.com/H55Dx9phy6

Brits will bask in sunshine

However, he added: “Temperatures are going to build up through Wednesday and Thursday, and temperatures could reach 33-34˚C on Thursday.”

Most of the UK will enjoy dry, bright weather on Monday.

Temperatures will be highest in the south of England, the south east, the midlands and parts of the north.

The Met Office said: “A fine, very warm spell is likely and it will probably turn hot.”

John Hammond, formerly of the Met Office, revealed: “Midsummer heat and the hottest spell of the year so far is forecast, thanks to southerly winds and air from sub-tropical latitudes.”

He added: “Most will have fine and warm weather, with heat peaking from midweek onwards.”

So far June has been a bit of a washout, but warmer weather is on the way.

Now, where did we put that bikini…?

Head to our Facebook page @EntertainmentDailyFix and tell us how you’ll enjoy the heatwave.