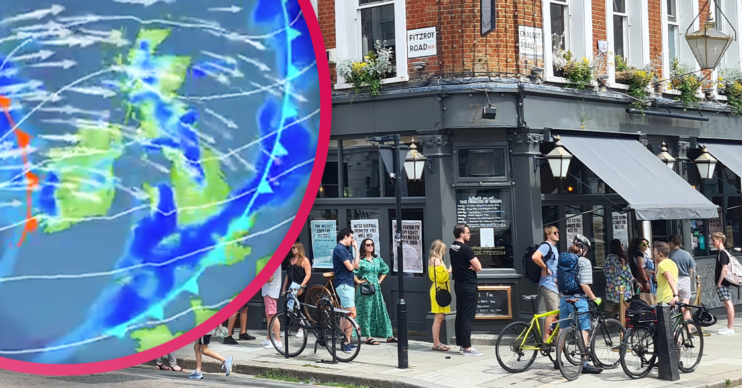 The rain is a good thing for once!

Pubs and restaurants in England have been given the green light to reopen this weekend (July 4) by Boris Johnson.

However, there’s bad news for Brits looking forward to sitting in the beer garden during their first trip to the pub since March.

The Met Office has said the weather isn’t expected to play ball.

In fact, Brits are expected to be drenched, as the country gets a month’s worth of rain in just 24 hours.

Strong winds and rain are due to move in from the west during the morning. The rain will become heavy as the day progresses.

Met Office spokesperson Nicola Maxey said: “Saturday will see more unsettled conditions, with showers beginning in the west during the morning which will move across to the east.”

She added: “While it won’t be unusually wet for the time of year, some areas in the east could become particularly heavy for an hour or two in the mid-morning to early afternoon.”

After that, she said, more rain is forecast.

“Pushing in after that will be a spell of drizzly downpours and some low cloud which will hang over the UK for the rest of the day,” she said.

Remaining unsettled this week thanks to a powerful jet stream which will drive areas of low pressure across the country, bringing bouts of wet and sometimes windy weather. Signs of something drier developing next week.

Keep an eye out for the 10-day trend tomorrow for more info. pic.twitter.com/f4AnfnN5TX

Between 35-50mm of rain is expected to fall and Sunday isn’t looking much better.

“The weather is out of our control”

The weather isn’t going to deter chains such as Wetherspoons, though.

A rep said: “The weather is out of our control, but our pubs tend to be three times larger than others so we are not worried about people being inside our venues.”

They added: “We can’t predict what the weather will be like in England, but we have faith that our customers and staff will be as safe as possible.”

However, one look on Twitter shows that many Brits are pleased heavy rain is forecasted to put a dampener on Super Saturday.

Read more: Scientists hope a coronavirus vaccine will be ready by the autumn

“I hope for a lot of rain, perhaps fewer people will catch the virus,” said another.

Others revealed why they wouldn’t be visiting the pub.

With pubs reopening it isn’t such bad news to have bad weather for when they initially open.

“The weather forecast, my local not opening until Monday, and the police saying it will be like New Year’s Eve (with no clubs, and only half the pubs open, on restricted numbers),” said another.

“I don’t want to sit out in the rain”

“Don’t like pubs much and don’t want to sit out in the rain,” said another.

“I know you like your sun,” said one Twitter user in a conversation with their pal, “but with pubs reopening it isn’t such bad news to have some bad weather for when they initially open.”

“We’re back to rain and more rain. Will put a dampener on pubs reopening this weekend, so probably not a bad thing,” said another.

“I live between five pubs,” said one. “I am really dreading Saturday and I am sorry but I hope it pours with rain.”